insurance is for damage due to accident only, if that was an option - service center must have jumped and advised that option even before this conversation

Ok. So I had similar issue. My 450 stopped charging last Tuesday evening and would throw C014 & C036 errors - both relating to the onboard charger. I’ve seen this before and the issue was with the cooling fan on the onboard charger not working properly.

After having seen your post earlier I was a little concerned that I might have to either spend ₹32,000 and replace the onboard charger or spend ₹10,000 and buy a Portable DC charger (Gen1.5). The service team picked up the scooter last Friday and, to my relief, called me on Saturday to confirm that the 2 fans on the onboard charger needed to be replaced and it would cost around ₹3500.

Both fans were replaced and the total invoice was ₹3532 (on Service Pro, so no labor or pickup/drop charges). The older parts were returned back to me. 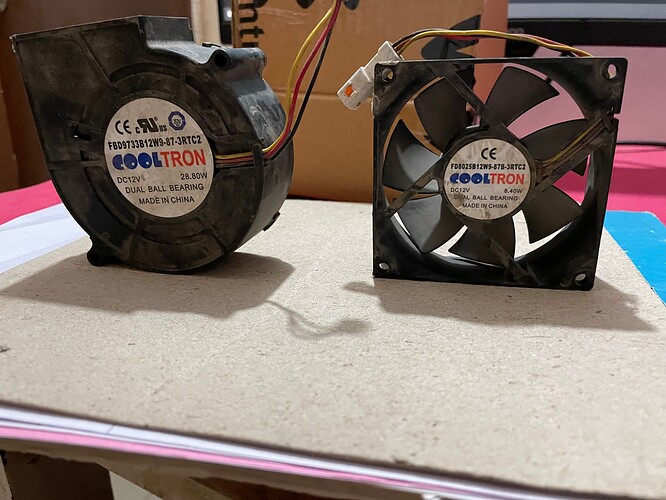 thank goodness only the fans failed, Looks like a lot of GEN-1 owners will share their after warranty services provided by Ather. Let’s see how the ends get tied up.

Genuine question: Does these fans cost so much?

It should not become like Apple keeping the repair with themselves making it an expensive affair for even a trivial thing.

One looks like a CPU case fan and the other is a axial blower type fan. I googled the part number as it seems to be sourced from Cooltron, headquartered in the US.

That said I have seen CPU case fans ranging from ₹250 to ₹1500 with varying airflow values, so no idea on how much these cost.

And, Pretty sure there is a mark up from Ather, which I am ok with because they have to make money from this!

And, Pretty sure there is a mark up from Ather, which I am ok with because they have to make money from this!

Sure, without markup, they can’t make money. They need to keep the margin fair. Being fair does not require competitor or market forcing it. Ather has done this on extending the warranty on old vehicles.

To be honest, I have no idea of the cost and margin. Just a gut feeling - seeing the fans made me think it’s too expensive.

And, 18% GST is a killer as usual. Govt might earn more than what Ather earns without a sweat

As soon as a i saw the bill and then the fan pics i had the same question. and im 100% sure they dont cost nowhere near the price quoted.

Govt might earn more than what Ather earns without a sweat

I googled the part number as it seems to be sourced from Cooltron, headquartered in the US.

But it is shown “Made in China”

What exactly happened after that, did you go for the Unit replacement or did you just bought the scooter back home and now using the DOT charger?

A post was split to a new topic: Dashboard issues

Had you taken rhe subscription packs?

The scooter is now being converted to a 1.5 gen version. Work is in progress. A lot of communication happening between Me and Ather team. I will share a detailed post once i have this sorted.

Hey @abhishek.balaji can you share what other charges can be charged by service center despite being on service plan as I had been charged labour amount for replacing the rear tyre all by service center

@abhishek.balaji Any update on this please. One of Ather owner was quoted Rs 3000 at Pune SC to replace the handle grip !!

The Loot of Ather service centres, I thought Ather will be different from ICE vehicle services, after all this time and now much-needed popularity they have TURNED.

I had got my handle grip replaced a month ago for free of cost under warranty, so until the vehicle is under warranty, i don’t think they charge any amount for changing it if you have an active service subscription.

So it is replaced free of cost, i guess in other SC and being charged Rs 3000 at Pune SC @abhishek.balaji Please suggest

It was ₹2600 sometime back. Owner had his grips stolen! Who steals grips?

Points to Ather though should release further spares like grips alone, some child parts of Dot, like the connector tab to people which are getting worn or vandalized.

PS I wonder why the owners didn’t claim insurance 3k is not a small amount.