This is the first owners’ meet for those who got their vehicles post August 2019. The previous meet was held on 25 August. if you missed it, you can check out the video to see what it’s all about.

Check your inbox for an invite and RSVP to let us know you’re coming.

Thread for discussions and information related to the first owners’ meet for those who got their 450s delivered post August 2019.

I got an e-mail from Ather inviting for owners meet happening on the 8th of December in IBC Knowledge park from 10am to 12pm. Unfortunately I will be travelling that weekend and I wont be able to attend.

Who is attending? Would like to know the updates from the meeting.

Why is it that only some of us have received intimation about the December 8th owners meet? (Through email)
And how come there’s no word about it on the forum yet?

There is a owners meet on the 8th December? Is this some exclusive meet for selected members? @abhishek.balaji

That’s impossible. Ather would never chose between members like that.
I’m assuming that the email just didn’t go out to everyone yet.
I think the ones who’ve gotten their scooter after the 3rd owners meet have received this email.

I think the ones who’ve gotten their scooter after the 3rd owners meet have received this email.

Guessed it right. We have a large number of folks who became owners after the previous owners’ meet, so this is the first one for them.

Is anyone going to the owners meet from rajajinagar or mahalakshmipuram area?

I am planning to ride down from Atherspace to IBC on Sunday morning. Interested folks, pls respond on this thread so we can decide what time to arrive and leave from Atherspace.

Hi @raghav.srinivasan, I’d like to join you. What time?

Sounds good. See you there!

Thanks for an amazing day, guys at ather 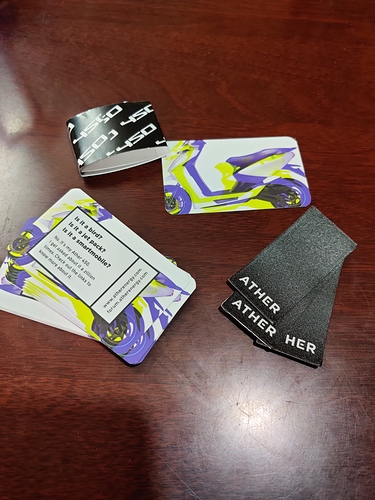 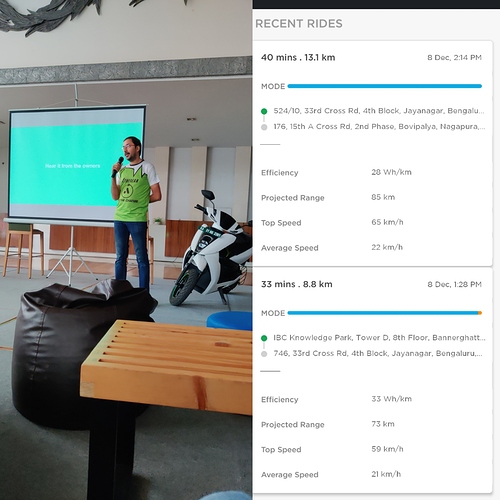 Hey guys
This is in regards to something that was brought up in the owners meet today.
Its about charging overnight.
From what we understand, it’s completely safe since there’s an autocutoff right ?
Normally if you charge overnight you end up with 100% SoC in the morning. But if you’re at 100% by the end of the night and you unplug. You reach an SoC of 96%-98% by the next morning.
This would mean once the battery reaches 100% the charger does cutoff but it turns back on once the battery drops a little, keeping it at 100%.
Now is that good for the battery? If this is in any FAQ
or Blog that I missed, I apologise. Do direct me to the FAQ. If not please try to help us understand.

It trickle charges at a very low rate and that will not affect the battery. If you still want to manually cut it off, you could fix a WiFi relay that you can program to cut off after some time.

I have a Mi Plug that is scheduled to stay on for 1.5hrs in the night and then again for an hour in the morning. That way any residual loss overnight is compensated in the morning.

Yet another meet…yet another nicely arranged event!

The difference this time was except some 6 of us, all were new owners. The crowd was small but the enthusiasm, the excitement, the apprehensions, the questions were not.There were around 35 scooters in total that Attended the event.

I left home at 08:30 hoping to reach the venue by 09:30 to 09:45. Thanks to the Cold Sunday weather, the roads were literally empty, I reached the location at 09:10. Since the event was at 10:00, I was the first person to actually reach there. It was fun and the below snip from the ridestat shows that 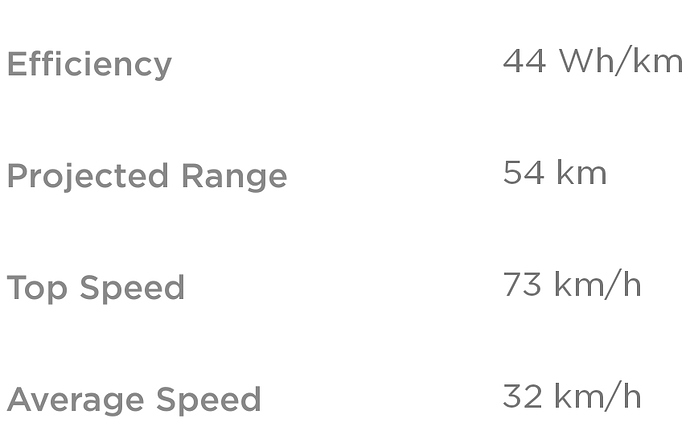 After registrations, the event started with @Saurabh_Sharma welcoming all the new owners. 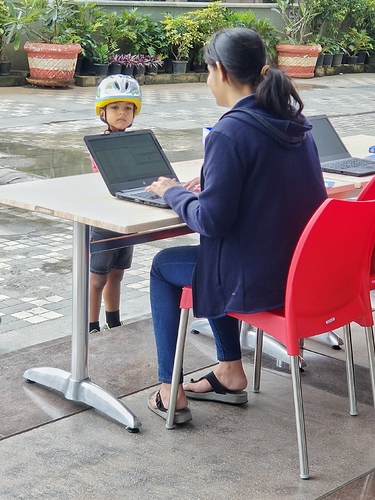 He followed it up by the first major announcement. The free charging at public Athergrid is extended by another 3 months. So till next financial year, people need not worry about it. 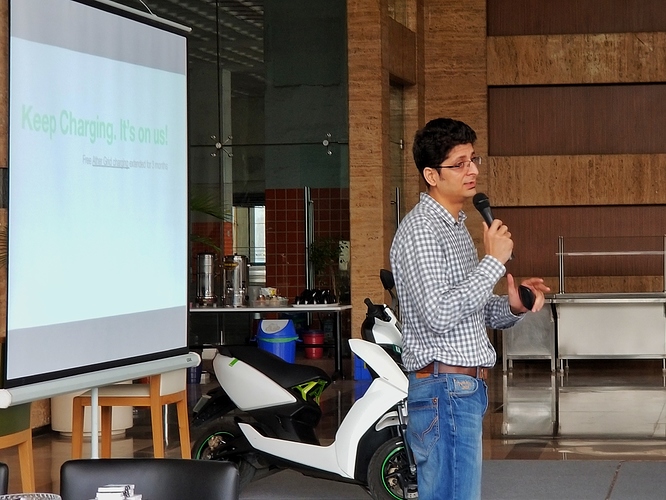 It was then time for some numbers. The collective distance covered by all athers till November has now reached 40,00,000kms
Then the comparison of how Bengaluru and Chennai rides was shown. The record for highest number of kms on a single charge remains with Bengaluru at 119kms. Once peoplelearn more about their vehicles, with Chennai’s flat lands I expect someone to break it soon though. 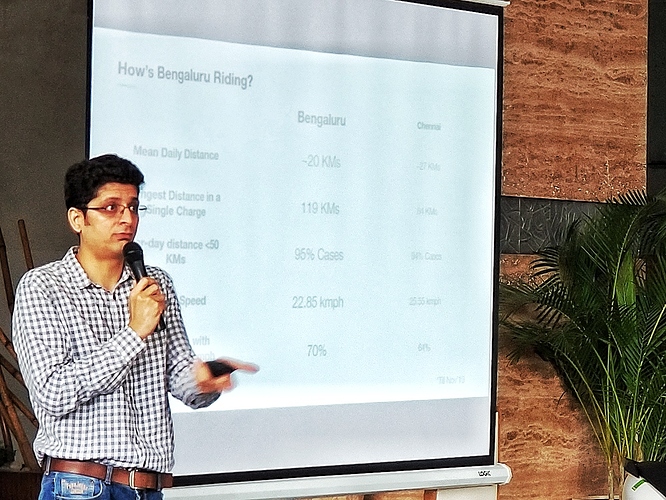 Then regarding the charging, Saurabh told that ghe favourite charging time for most users is between 18:00 to 22:00. It was surprising to me and he told that even Ather was surprised to see this. 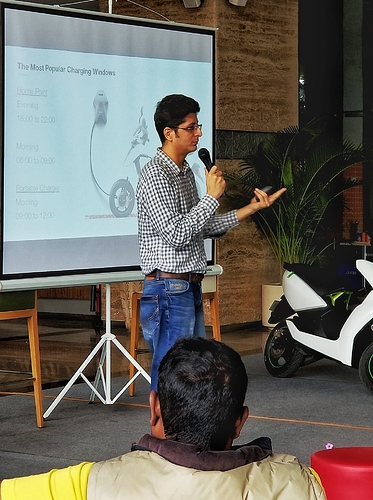 It was later my turn, as an owner-moderator of the Forum, to speak about the forum navigation and best practices on the Forum. @raghav.srinivasan followed me with details of the FAQ section and community rides
This was when I got to announce the next initiative by Ather…the Community Charger. Ather has provided @rajeshkav, @raghav.srinivasan and me with a portable charger each. This will be charger for the community that can be used by anyone with a request to us. The request has to be placed on the forum and can be used for long rides, emergencies or community rides for example and duly returned back to the host. We’ll soon make a forum topic for the same.

Then the announcement of the next community ride happened. It’ll take place on 15th December from Ather space in Indiranagar to Patel’s Inn in RT nagar. It’s a distance of around 10kms. But the exact route will be communicated later after permission formalities from authorities will be completed. I was happy that I can see many Athers together, only after I came home, did I realise that I’ll not be in station next weekend.

Then couple of selected and invited owners @AnaghDeshpande and @chethan.bn spoke about their experiences so far. 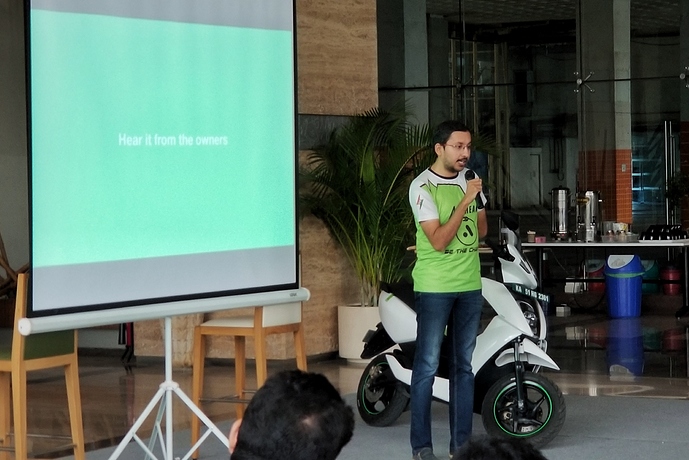 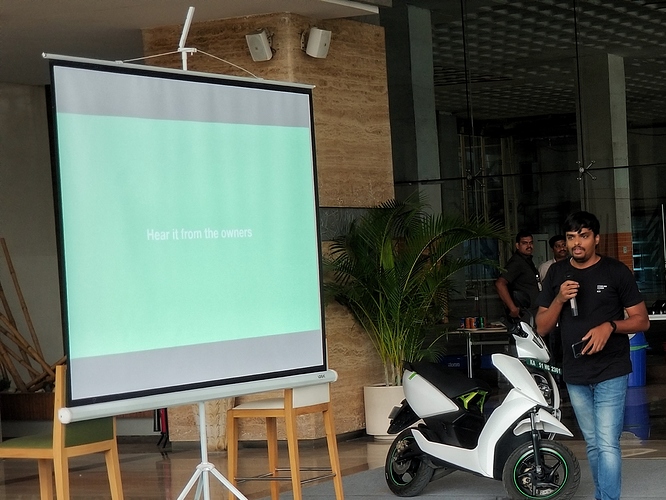 After this @gandharv.bakshi gave us a peek into the upcoming changes in the upcoming OTA update. Among bug fixes and stability updates, one update that I liked was that the forum will be integrated with the Ather App. What I didn’t like however was that I’ve to wait for more time for that elusive dark mode.

Saurabh later showed couple of nice how-to-do videos like how to use the park assist, how to do the OTA update.

It was then time for Q&A session where all users got answers for their questions from the Ather team and other owners.

This was followed by lunch and candid chat where all users got to know about each other at a more personal level. Meantime, people who had issues with their scooters got it checked with service team present in the location. By 2pm I left home. It was nice to meet known faces again and to know new faces. It also was a nice opportunity to link faces and names to cryptic forum handles

I took some tired-of-answering cards and couple of Ather laptop stickers on my way out. 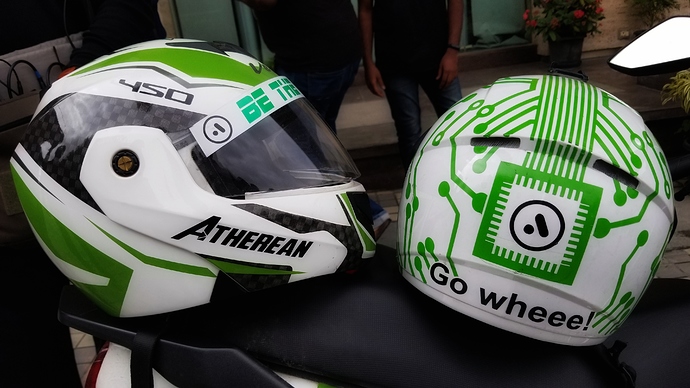 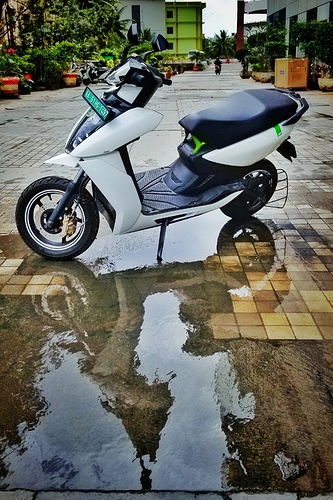 Unfortunately I’ll be unable to join the community ride next Sunday. However My Ather might still make it. With Patel’s Inn having a go karting track, I hope I get to see some nice pictures