Over The Air Updates

All Over The Air (OTA) Updates will be shared on this thread. This thread will be kept locked to allow consolidation of updates. Users can discuss about the updates on the discussions thread or on the product threads.

We have rolled out an update to the vehicles today. Owners should be able to get this update on their vehicles and get the details on it, already sent to them in their inbox.

Here’s the detailed version: (TL;DR at the bottom) 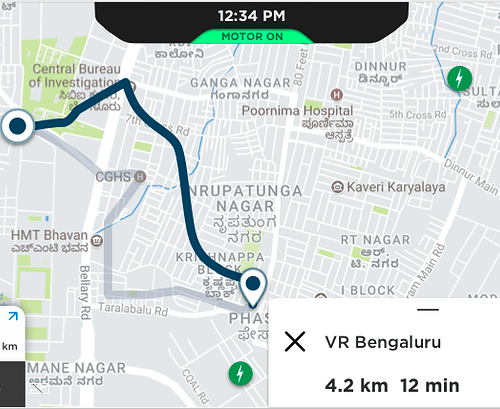 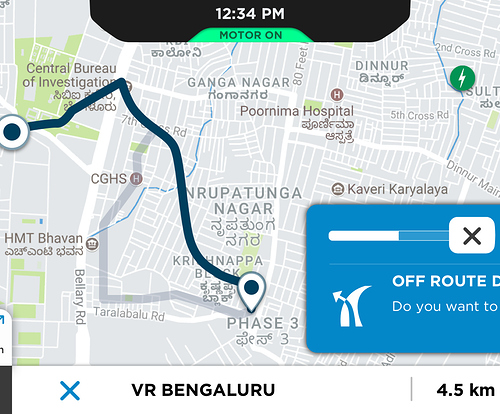 Based on the feedback we received from owners during the Open House, we have tweaked the audio settings for the indicators and reverse to improve audibility.

As discussed during the Open house with owners, future owners and enthusiasts, here are the updates for Range Estimation, energy consumption and trip history.

Given the number of vehicles on road and the amount of data, we feel it’s not the best experience to give personalized predicted range figure using our prediction algorithm. We’ll bring it back later when there’s more data and the algorithm performs better.

Now, every-time you start your vehicle at 100% charge, you will see a range figure that is pegged to the median or average value seen by all current vehicles on the road. Those numbers are 55 in the normal mode and 65 in the eco mode today. These are median values, which means there are vehicles which have been getting 80 km in this mode as well. We are also renaming these modes as Sport and Ride.

During the ride, the range that you see will be [(remaining battery %) x (range value at 100% battery)]

These modes can also now be switched during the ride as opposed to being switchable only while the vehicle is stationary.

3. Real-time feedback on the dashboard:

Feedback about your energy consumption will be shown on the dashboard in real-time. If you’re riding in a manner that’s making you consume an unusually high amount of charge, the ride screen will reflect it.

Rather than limiting or changing the existing modes, we have developed a new mode that will improve range further and make is easier to achieve 75km on a charge. A vehicle with this mode has been sent for homologation.

5. Estimated range in the trip history:

The estimated range of previous rides will be available in the Trip history section of the app. Based on the energy consumed per unit charge, the user will see an estimated range figure of his/her previous rides to get a sense of the range one’s riding patterns are bound to obtain. This is an app based feature is under development and testing. Users will receive this feature once the testing is complete and we roll out the updated app.

(this will take some time) 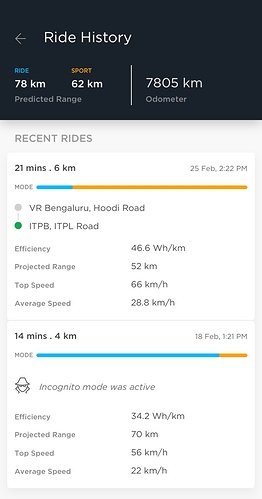 We wrote a detailed blog on Range for you to understand the range of an EV better.

A new version of the Ather app has been released.

In our earlier post about range-related enhancements to the vehicle, we mentioned that we were developing a feature on the app for you to get better information about your rides and range. And that’s the highlight of this update. We look forward to users obtaining higher ranges from their rides, aided by these enhancements and the extent of information made available to them.

You can now access detailed information about your trips in the Ride Statistics section of the app. 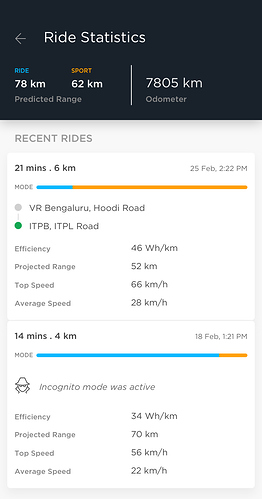 The next dashboard and Ather app over-the-air updates are here.

Heads up on the installation time: This update is relatively bigger in size and will take much longer than usual to install, depending on internet connectivity. So do give it some time. (Yes, there’s lots in store!)

The new version of the Ather app will be available on Play Store and App Store over the weekend.

Let us know your thoughts on this update!

A new version of the app will be available shortly on Play Store and should be available on App Store by Friday. Besides some UI enhancements and bug fixes, this update brings you a new feature.

Note for those who’ve signed up as beta users : If your app doesn’t get auto-updated to the new version, please try uninstalling and re-installing the app again.


Report a product-related issue through the app

We are opening up a new channel for users to log issues which they may encounter with their ride or charging experience. This will help us streamline our product improvement process internally and consequently deliver better product upgrades for you. 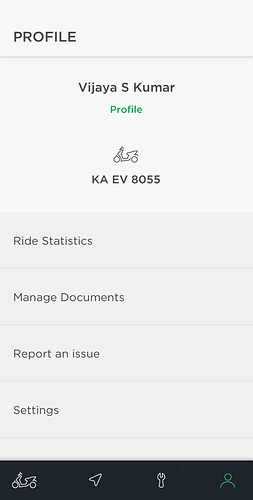 To report an issue 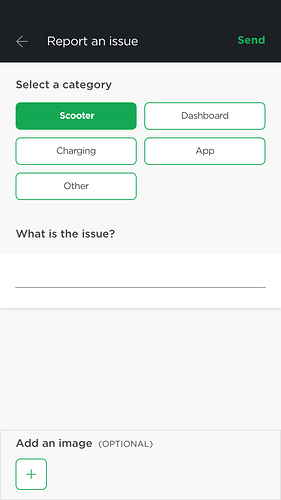 Once done, you will receive an acknowledgment email. If we need more clarity on the same, somebody from our team will get in touch with you in 1 working day.

Please note that this is not the channel for urgent and immediate service requests like roadside assistance or periodic maintenance. In such situations, reach out to our customer support team on 7676 600 900

The next vehicle OTA upgrade will be available shortly.
A heads up about the download size - This update is as big as the previous update and might take as much time to download depending on the connectivity.

This upgrade has a new feature and an enhancement
The Eco mode is for those rare days when you need to go that extra distance or make an unplanned detour. The top speed in this mode is 50 kmph while the TrueRange (what you’ll see on the dashboard at 100% charge) is 75 km. 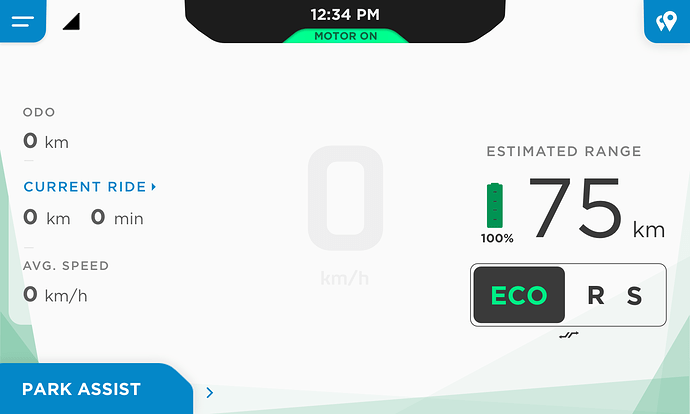 Ather 450 Eco mode.png1600×960 75.6 KB
Motor fan noise reduction - The motor fan that air-cools the motor will emit a lower noise than earlier. The speed of the motor fan is what determines the level of noise. Earlier, the motor fan would run at full speed when turned on. With this update, the motor fan speed will be gradually increased to aircool the motor when the temperature climbs beyond a specified threshold, thereby optimizing for the noise.
In addition to this, there are also some bug fixes which are part of this update.

(In the last Owners’ Meet, we spoke about a few more features and enhancements that were supposed to be a part of this update. However, some development and testing are still underway, and we will release another update in the next few weeks. Essentially splitting the update into two, to ensure all Bengaluru and Chennai customers receive the Eco mode at the same time.)

A patch OTA update is being released to all vehicles today. It fixes some recently reported issues such as the one about range displayed at full charge and app sync issues while charging. Additionally, it also carries fixes for motor firmware bugs.

Some tips to get the update without much hassle

Kindly reach out to Customer Service if you require assistance.

The next over-the-air update (Software Version 4.1.0) will be released shortly and made available for all Ather 450s.

It is aimed at improving the navigation & touchscreen experience and carries two new features and some enhancements.

A patch OTA update (4.1.1) is being released to all vehicles today. It contains some minor bug fixes and a motor firmware update.

If you have queries on how to install the update, you can refer to this post: 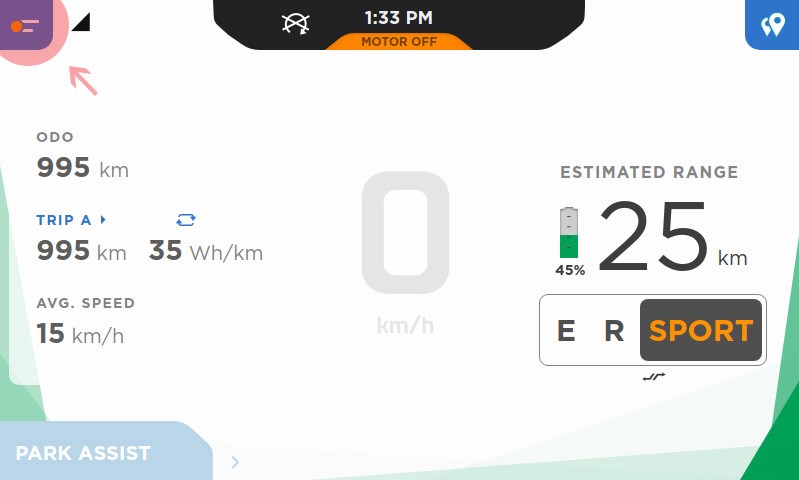 We have a quick ‘How-to’ video to help you download and install the over-the-air updates. If you prefer reading, a detailed article about…

Kindly reach out to Customer Service if you require assistance.

A patch update (4.1.2) is being released to all vehicles tonight. It contains fixes to a bug introduced by the previous update (4.1.1).

For more information on scheduling and installing updates, refer to this post:

We have a quick ‘How-to’ video to help you download and install the over-the-air updates. If you prefer reading, a detailed article about…