How is the Warp Mode so quick?

City roads are crammed with all sorts of commotion. Signals, potholes, cows, rest stops, and other such obstacles can make everyday commute extremely taxing. But being able to accelerate rapidly, to be the first off the line at a traffic stop, can make urban commuting faster and more fun. When experiencing frequent slowdowns or stops in traffic, you want to get moving as fast as possible. For this, rapid acceleration is key. Further, when you’re thinking of going electric, you want an option that’s on-par or better than the traditional petrol two-wheelers.

When the Ather 450 was introduced, the sport mode already blew the socks off those who drove it. We wanted the performance of the Ather 450X to be far superior. With over 2 years of learning and significant improvements in battery chemistry, our engineers were able to introduce Warp mode with the Ather 450X.

So, how does it feel to accelerate from 0-40 kmph in 3.3 seconds? The experience of taking off in a blink and having the wind rush past your ears can’t be explained in words, but the science can be.

We wanted Ather 450X to deliver consistent performance but over longer distances. Warp mode requires the battery pack to allow the motor to draw a large amount of current, over a very short duration of time. Discharging or charging battery cells generates heat, and when there’s additional stress on the battery pack such as when rapidly accelerating or charging it at fast chargers, this heat needs to be dissipated. Not only does heat affect the long term battery life, but it also has an impact on how much current the individual cells can push out.

Right from the beginning, battery and cell research have been one of the major focus areas at Ather. Our team worked endlessly to refine the thermal engineering for the battery pack of the 450 and these significant changes brought the Warp Mode on Ather 450X to life. The Ather 450X features improved battery chemistry, better thermal management, and an improvement in the form factor of the cells used in the battery packs. 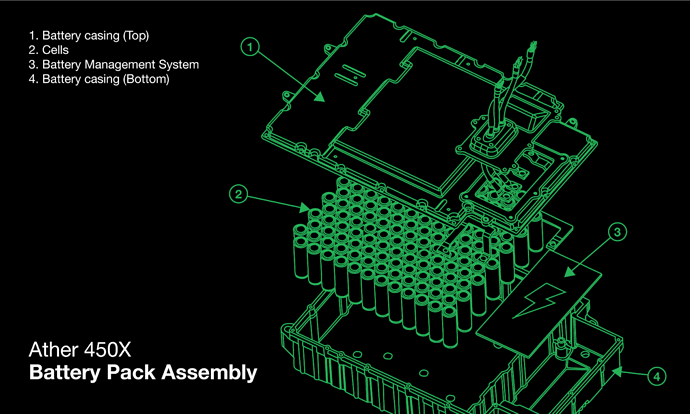 Extracting more out of the battery pack.

Let’s rewind a little bit. What is a battery pack? It’s several individual cells packed together. The cells are configured in a series, parallel, or a mixture of both to achieve the desired voltage, capacity, and power density. The battery pack also contains the Battery Management System (BMS), which is a fancy term for electronics that regulate and manage the cells. The BMS takes care of the cells when you’re riding, charging, and even when your vehicle is idle. The cells and BMS are then packaged into a “battery pack” that is sealed to ensure that the battery packs can withstand minor impacts and occasional splashes of water.

Now that we’ve got the pack out of the way, let’s talk a little bit about the cells used in the battery packs. Cells are the individual cylinders that you see in the diagram above and are a core component of anything that goes “beep” these days. The commonly available cells for battery packs in automobiles are 21700, 18650, and 20700. The numbers represent the size of the Li-Ion cells. The Ather 450 used the 18650 form factor for the cells. With the Ather 450X, the cells have been upgraded to a new form factor, called the 21700 cells.

Most cities in India have moderate weather conditions. The ambient temperature has a direct impact on the battery pack and affects how much performance can be extracted from the same pack over a longer period of time. Bad thermal management is a battery pack’s worst enemy, especially when trying to extract higher levels of performance from it. This is why a lot of early electric scooters had a boost mode that enabled rapid acceleration but would be available only for a few seconds.

The thermal threshold of the battery pack in the Ather 450X has been significantly enhanced to enable the use of Warp mode for a long duration, across varying climate conditions across India. The newer thermal management not only keeps the battery pack cool under regular riding conditions but also ensures that the generated heat is dissipated faster when you speed away in the Warp mode. Ather 450X and Ather 450 Plus are sufficiently equipped to deliver high levels of performance, consistently over time.

As many of you start trying out the new warp mode in your city shortly, we thought we’ll give you folks a quick run-through of the improvements we’ve done, to enable an exhilarating experience. Right from designing battery packs to extract performance, tuning the throttle response to enable quick acceleration when needed, revamping the thermals to enable quick bursts of power, we’ve made lots of improvements in the Ather 450X, to bring you that Warp mode!

Got questions on warp mode? Post them here and we’ll answer them!

A post was merged into an existing topic: Warp Mode trials, now in Hyderabad!

Battery cell upgrade is impressive. So is the performance (little bit). But still, meh! I was hoping you’d introduce super capacitors for 450x.

Heat problem could’ve been solved with super capacitors. Coz the rapid drains and charges happens not from the battery but from the capacitors which is fantastic for brake and accelerate use case which is the most frequent use on Bangalore roads!

I am a proud 450 owner, I tried 450x and it’s slightly quicker at best. Actually the very first 450 ride when I bought the bike was that quick (range40)and then after the firmware it was slowed a bit and gave better range. I still think 450x is a 450 at firmware v1.x sorry but that’s what I feel.

Supercaps have very high volume to charge ratio. Good to implement on buses maybe, if designed right. But for scooters, you’ll need to carry a sidecar.

negative. Instant pick up for few seconds does not need huge volumes. Proof of this is nawa racer bike. Check it out. 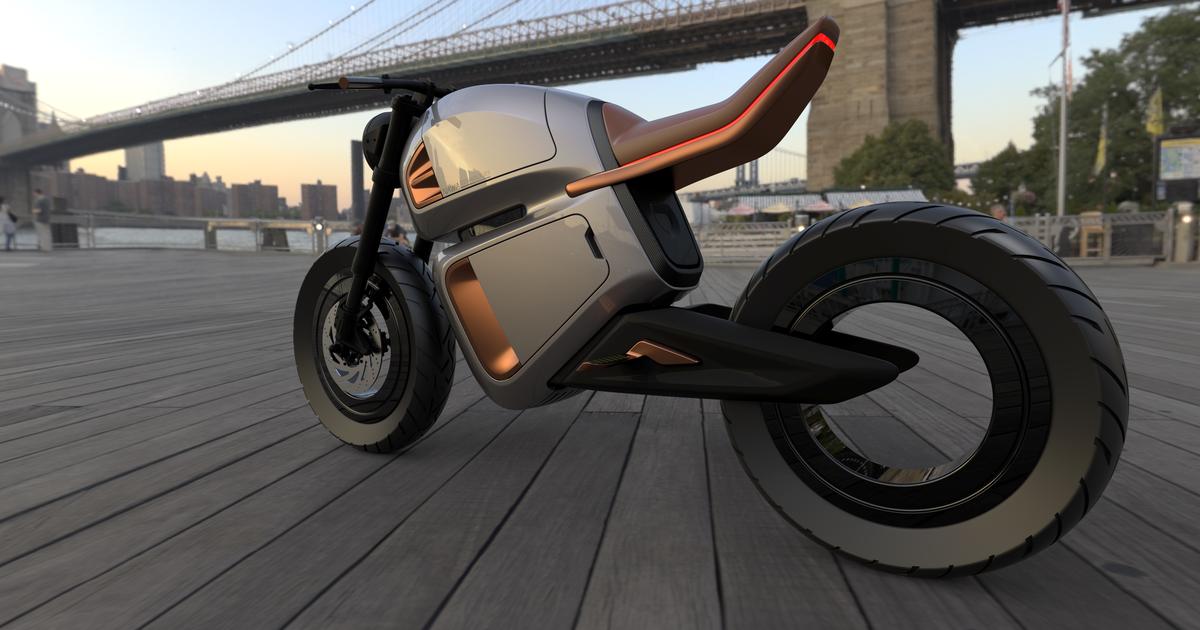 This sweet-looking electric motorcycle has a relatively small, lightweight 9-kWh battery, and yet it boasts a 300-km (186-mi) urban range and superbike-level acceleration thanks to an ultracapacitor hybrid energy system unlike anything we've seen...

It is not the weight. The volume necessary for supercaps are not to scale. But yes, for instant kickoff, a bag of caps will work. What would Ather call it? “Spore drive”?

I wonder if that’s been trademarked

Yup. I guess. Warp mode is a good improvement already. Ather 550Y mighty have ‘cap afterburners’ as an upgrade over 450x

Spore drive is for Jumping from one place to other , Dilithium is the one used for warp mode

no dilithium and hence no warp for us

have to see if they’re completely gone in this season

Yeah. Gotta find why the dilithium went kaboom. Meanwhile, I gonna name my S1 diLi-GT or something . DiLithium and all…

I did not this this them, but the below is a place where supercapacitors cam really help!

it must be generating a lot of power in regen, but though the motor is giving the power, i think that power is not being able to charge the battery

yeah, but can the super capacitors hold the power till the BMS pushes that power into the battery?

Days even in the correct cases. There’s been demos on their retaining capacity and it sometimes surpases the drain in Li batts. But still, the regen power can be put into use without sending it to the battery pack for reducing overhead and increasing efficiency. Maybe, end of day when scooter is sitting idle, caps can charge the batt.

Wow this is cool, maybe ather should think of this, if the super capacitors are cheap, they might do wonders