A huge shout out to all of you for volunteering to test the usage reports!

We’ll be sending you a copy of your November usage report to test over email. Do take a look at it, and let us know your feedback and any issues you can spot.

Note: This is a closed beta before we roll out the feature to everyone, so we’d appreciate it if you can refrain from posting or talking about it in other channels.

will we be getting software test updates as well as the monthly reports?

Got the first report and the details about the units consumed and average efficiency is really useful.
I think the data is a little miss, because I remember I once clocked 83kmph on ORR.

And also the average charging percentage is also a little miss I guess, because I normally plug in at around 45%, but it’s showing 61%

On the top speed, have you seen this? It might not match the dashboard speed

I feel, my dashboard is showing a higher speed. Why is it so? Ather 450: Vehicle

According to regulations, the displayed speed of the vehicle can never be lower than the actual(true) speed the vehicle. However to account for inaccuracies in measurement, variance in tyre pressure, tyre tread, etc, a safety factor is introduced. While our ideal top speed is 80kmph, the displayed speed at the same time would be around 87-88kmph. Hitting a speed even higher than that can be attributed to tailwind, lighter rider weight and a downward slope on the road. The regulations have set…

Had a look at the report… Neatly put.

Better use of colors would be great!

Also, the recommended charge levels are 20%-80%.
How can I limit the top cap without manually stopping the charge?

So whatever speed we hit. It’ll show us 80kmph on our report ? Because I hit 91kmph but the report says 80kmph

Just saw the report. I see everything as 0 or NaN wherever a number should come. Its JUNK all over it. 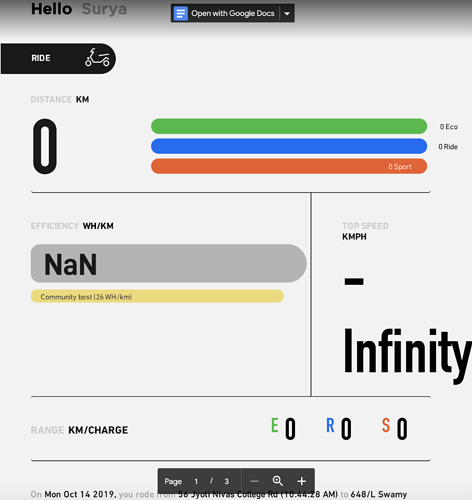 Is that Stay Anonymous feature turn on in your Ather ?

Here? It’s a comparison between the two months

I see that you guys have included efficiency in watt hours per km, and compared it to the best community efficiency. I have two points to note:

Also, the font seems a bit weird in terms of the spacing between alphabets. Especially in paragraphs, it looks unevenly spaced.

In the second page of the report, the bar graphs are not consistent in design compared to the first page.

I would also like to see information on the longest single trip by the user.

On a side note, I have a fundamental problem with these types of reports, that might require some changes.

I’ve mentioned two issues in the past, and I’ll state them again, for your consideration.

Here is the screenshot which i received

The report is precise and gives a basic detail about the rider. The top speed shown in the report is different from the actuals. Aside request you show Tyre pressure in dash board. Efficiency shown is also not correct. I would like to know if there is any minimum distance kept as benchmark for showing the efficiency.

The report was good but it seems there are some technical glitches as myself clocked 90kmph once. Once it also went below 20% SOC so personally I think this need to be improved a bit.
It’s good to see how much electricity I consumed both at my home and at Ather grid. Hope this data was accurate and as a proud owner of Ather 450 I really appreciate all the work and support put in by Ather team.

Nice initiative. Really appreciate it. So my charging start % is showing 55% ,so is it better to use till 20% and then put to charge ?
My range is showing 68kms in sports but how to utilize it, as the vehicle shows only 55.

Overall liked the way report is been designed.
Thank you team