I’ve faced so many issues in the last month post delivery that I’m sitting here scratching my head on the fact that I just bought another android based computer and not a vehicle. I may be a teenage adult but I do know that things are first thoroughly tested before release and that customers are not Guinea pigs. My 450x’s dashboard is basically broken after the latest anti theft ota where google maps decides to open itself and sit off , the turn indicators decide to cut off on their own whim. Half the grid chargers don’t support the 450x. I mean they’re converting them to paid use by March which is ridiculous. I had to take in my bike to ather yesterday and after having a look at it they determined that the software is buggy and that I’d have to wait for an ota to fix things ! Wow so much for paying a premium price and a bunch of extras for features that don’t work properly.

My screen is stuck in maps when I start moving , it’s just grey , refuses to go back to the speedo. All I was told is that it’s a bug thanks to the new update!

I understand the pain. But this is their first attempt at Android so we have no option but to wait

Let’s hope they patch it soon .

Even I am facing the same issue of “some data could not be found” . I have bought the pro plan for complete year. What data is missing?

This statistics with data missing is fixed in the OTA update. Some users who registered got an early access of that for testing purpose I am one of them and hence can confirm you that. A stable version is going to be released for all in about a few days. So all I can say for now is that its been already taken care of and fixed.

Also for those who took the connect plans and missing the features due to software bugs will be compensated for the period until which the stable OTA is not released (Announced by Ather in one of the other threads). So they are trying to fix the loss which we are actually facing due to issues.

Here is the link of that announcement

Hey @450X-Owner The experience of our dashboard and app for the early owners of Ather 450X and Ather 450 Plus hasn’t been great. A shift to Android, some breakdown in communication between internal tools, corner cases missed in testing – the reasons are many but it doesn’t take away the fact that this is not the experience that you paid for. We are working on getting an OTA out in the next few weeks which brings back stability to the dashboard and the app features. Till then, to be fair to 45…

Also just in case if you have missed I recommend to look into all the post in Ather 450x category under issues and support where many who are facing similar and also other issues posted their views and experiences . Some posts can solve the issue which you might be facing or may face, some can help you know the actual reason for certain issues.

Hi there, @kumar.uppaluri2 is talking about early access to OTA for vehicle, that will fix the issues you are seeing.

It is not just App update but also Vehicle Software update. If your Vehicle software version on Vehicle Dashboard is not Ending with 51 then you are not having an early access to OTA.

It was opened for few people on first come first serve basis to collect the feedback and we have provided the feedback on it.

They will fix the Vehicle software based on early access user’s feedback and release a stable version to ALL ending with 5X greater than 51 which will fix most of the issues you are facing on Ride Statistics!

My dashboard software version ends with 48 so it means I am not having the update. I hope ather releases the ota soon.

I received ota update on 31st Dec. I am an owner of 450x and disappointed as much as you all are. But, after the recent ota update on 31st Dec it seems everything is fine. I am yet to subscribe for connectivity, so can’t comment on that. But, ride stats are perfect and showing the origin and destination properly. The new splash screen dedicated to series 1 looks awesome.

I took the delivery on 3rd jan. I have not received any ota for my series 1. How come some users are receiving and some not. Don’t know what and how ather is doing this.

Ota which other’s received was because they signed up for early access to test out update and give feedback of issues to be resolved before it rolls out to more people.

Yep, we’ve just started rolling out the update, you can expect it to be installed on your scooter in the next couple of days:

Hey @450X-Owner, We’re rolling out an over-the-air update (version 10.0.2) to your Ather 450X and Ather 450 Plus. We’ll be releasing it in batches over the next couple of days for all Ather 450X and 450 Plus owners. Here’s what’s new in this update: Series 1 UI on the dashboard for those with a Series 1 Ather 450X A new splash screen for Ather 450 Plus owners Bug fixes and improvements: Improvements and fixes on navigation and pushing location from the app Better syncing of docs uploaded …

Hi @abhishek.balaji, will I get this installed as I’m getting vehicle delivery tomorrow or only after I get subscription for connect services? Curious as this includes bug fixes. So, should not be dependent on subscription…

I had complained of many software issues I had faced, in a half an hr long call and the person was patient enough to listen and confirmed i would get a solution. Same day in the night I received the update. Please not, I am not part of any testing or feedback programe. What i am assuming is they would have pushed manually the update to my vehicle. Whether it’s right or wrong, right now the software level issues have been fixed. But, yes the concern of mileage is an issue which ather needs to address.

Ather can check e-mail templates. I got mail for registration completion notification and it still says 450. Not a major issue considering other issues at hand for Ather

. However, this is surely UE issue. 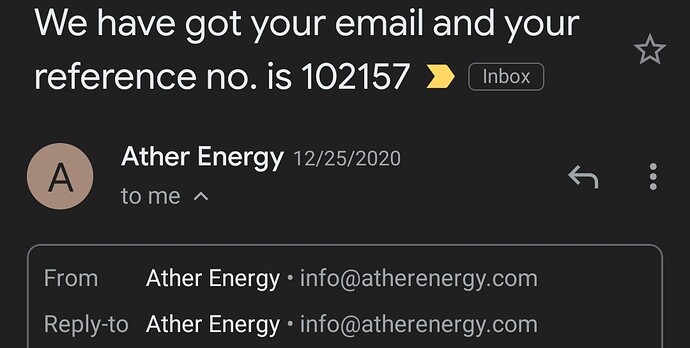 Thanks for flagging this, we’ll get this fixed!

Ok. I hope all users receive the update asap