The One Where It All Began

So where do I start? I guess I’ll start with the worst. Hyderabad witnessed its worst rainfall in decades. Many places were flooding. Roads became rivers, vehicles became boats. Most of the places surrounding my area were also drowning. Luckily, my house was safe. We didn’t have power for almost 24 hours. In all this mess, me and my mom were cleaning our home as there was nothing left to do. Then I got a call from Abhishek. He asked about the situation in our city and enquired if I’m safe or not. Then he said that they have a few Ather 450X with warp mode in Hyderabad and asked if I can take one for the weekend. Obviously, without hesitation, I said yes and started checking the weather app to see if there is any chance of rainfall in the coming days. The app showed rainfall for the whole week. I kept my fingers crossed and hoped for the best. Deep inside, my heart kept telling me that weather reports are wrong most of the time.

The day came and the sky was crystal clear. At around 1:30 PM, I started on my Jupiter which I parked near to the main road and took a cab to the location. Because of Covid, I was a little skeptical of taking a cab but took the risk following all the safety precautions. I reached the location and I was greeted by a person who is very friendly and he took me to the vehicle. It was basically a white 450 with warp mode in it. I completed the paper work and went to the basement to take the vehicle. He gave me a basic demo of it. Even though I know everything, I didn’t interrupt him to see how much he knows about it. He was a person from the dealership side and he was as enthusiastic as all of us here and know very much about the vehicle. He asked me to take it out in Warp mode from the basement as the ramp was very high and I can see how the Vehicle performs. I put it in Warp mode and didn’t even twist the throttle completely and the Vehicle was already off the basement. It didn’t have much trouble and was smooth throughout. Now I know it was going to be a fun weekend. I thanked him and left the location.

The One Where The Fun Begins

A little backstory. When I met with an accident in February, my left hand was fractured due to which I had to undergo surgery. To this day, I still have some trouble with my hand and I was not riding my two-wheeler as much as I used to do before. When I took my Jupiter to park it on the main road, I was not at all confident and scared. So I’m a little scared of riding the Ather which has disc brakes and I’m not at all used to it. Abhishek assured me that, 450X will be more confidence assuring and I can ride it with ease. So when I started riding the 450X, I was trying to adjust myself to it, and to my surprise, within a few minutes, I got the confidence I needed and was cruising with ease already. Because of the perfect weight distribution and low center of gravity, 450X is more confidence assuring than any scooter in the Indian market. I don’t think it’s fair for the Indian scooters to be compared with Ather. They are a total mess which is coming from a guy, who rode Activa and Jupiter all his life.

Let’s talk about Warp Mode. I’m a big fan of Tesla for a long time and I guess that’s what pushed me towards Ather in the first place. I used to watch the videos of passengers experiencing Ludicrous mode for the first time. Reference: https://youtu.be/bL7qvKQeAjw

Did the same thing with people who asked me for a test ride. Asked them to sit back and took them for a ride. All of a sudden I used to accelerate and I really wish I had the gear to capture their expressions at that moment. That instant torque brought a wide smile to everyone’s face. In one instance I asked the person to hold on to the vehicle tightly, but he underestimated it. When I twisted the throttle completely, his legs were in the air and I had to break to make sure that he remains on the scooter and not on the road. He was shell shocked and was in awe of the pickup. Warning! Whenever you’re in Warp Mode and about to twist the throttle, give a heads up to your fellow passenger for safety. My friend wanted to drive the scooter and I sat back. That instant torque was even amazing when you’re the passenger. It will scare the shit out of you. No matter how hard I hold on to the Vehicle was not able to control myself. It was so much fun and surely brought a smile to my face. When someone is riding in Warp Mode and you had to sit back, you cannot use your phone as you have to hold on to the Vehicle tightly. Brakes are one of the best in the class and I didn’t have any lockup issues.

When you’re in Warp Mode and accelerate all of a sudden, that’s when you turn a lot of heads because of the sound it makes and they can’t find you as you’re already gone. It turned a lot of heads everywhere I go. People looked at it very curiously, not knowing what it is exactly. One of my neighbors even asked if I exported it from a foreign country. When I informed about the price, one person told me that I could buy a Royal Enfield at that price and a scooter was not worth it. I asked him to go for a test ride and I didn’t even go with him. He took the scooter, rode very slowly took a turn, and was out of my sight. I was waiting for him, still waiting, waiting… and all of a sudden he’s coming at me, didn’t even notice until he was near to me(perks of an electric scooter). I didn’t even ask him anything about how it felt. He said in Telugu “Em pickup Asala idi, next level. Totally worth it” (basically he was awestruck by its pickup)

The One Where I had to Dislike Few Things

Mirrors: They are such a mess. Can’t even see what’s behind me properly. I had to turn my head whenever I’m making a turn. I felt my Jupiter side mirrors were far better. My friend felt the same. Aesthetically it was very pleasing to look from the front but coming to safety, it should’ve been better.

Seat: I like sitting as much back as possible and because of the seat design it was not possible for me to do so. I kept sliding forward. Maybe adding more cushion helps.

Rattling sound: Whenever I go over a speed breaker or Pothole, there was some sound from the back and I used to check if my seat was locked or not. As it was a prototype vehicle, I didn’t bother much.

Issues with motor: Few of the times even when the motor is clearly ON, the vehicle was not moving forward. As it was a prototype Vehicle, I didn’t bother much.

The One Where it’s Time To Say Good Bye

The day finally arrived and I had to return the Vehicle. My friend was so addicted to the Vehicle that he came along to drop it. He’s not a fan of 2 wheelers, but somehow he loved Ather! We started in the afternoon when there was mild traffic and the weather was good. Ather was a beast in the traffic and was able to overtake almost all the Vehicles. Ather and Beautiful We-Ather can make your day brighter. We enjoyed riding on the cable bridge on Durgam Cheruvu. Finally reached the showroom and returned the Vehicle.

Now the hardest part begins. Waiting for the delivery! Can’t go back to my old 2 wheeler as well as it is boooringgggg.

Thanks to Abhishek and Ather Team for a wonderful experience. Really loved the experience. Will be posting few pictures that I took. 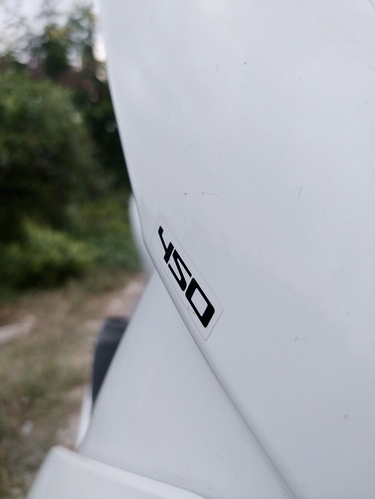 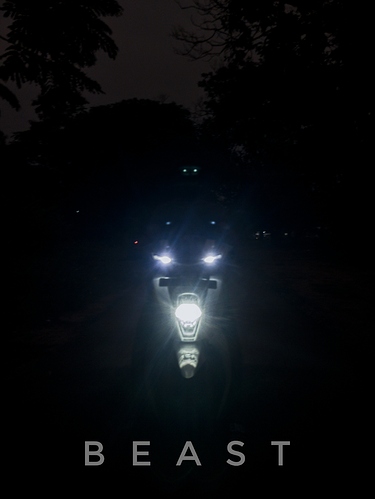 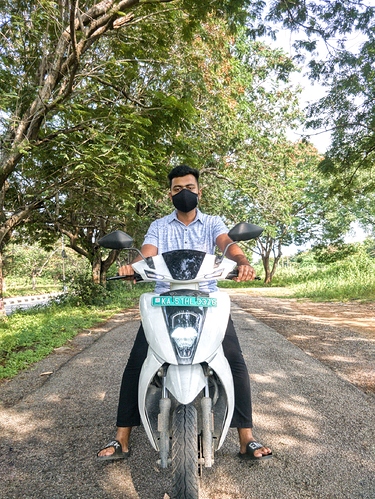 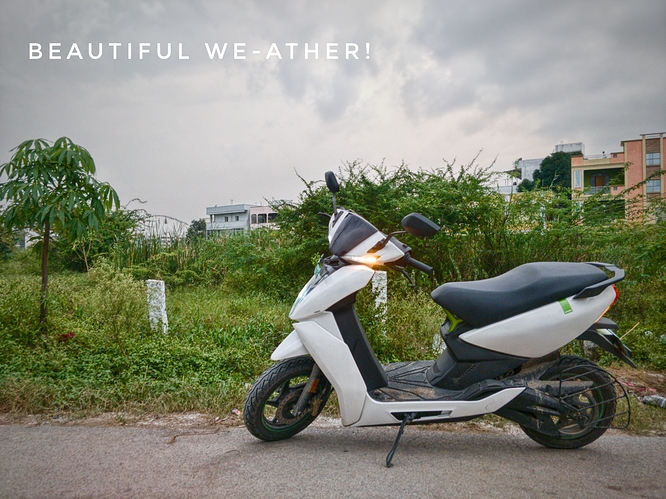 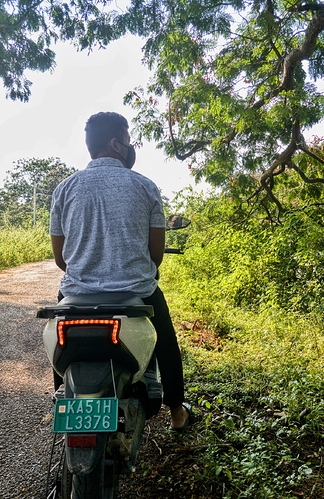 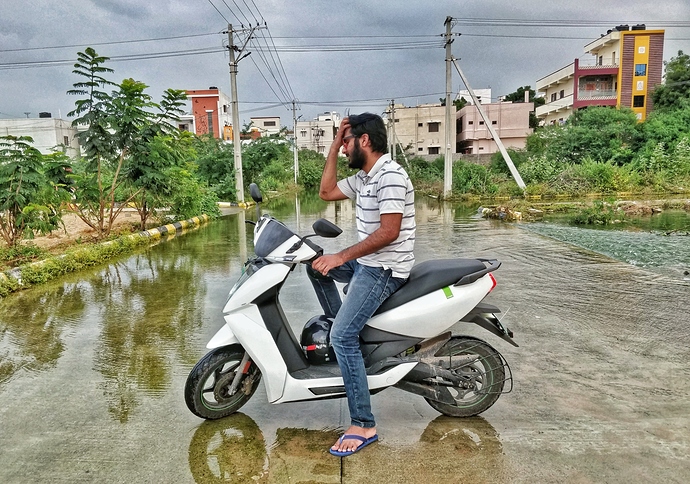 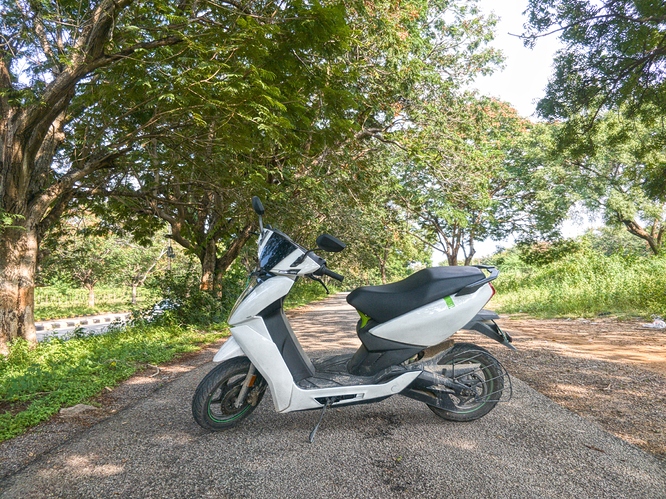 And here’s something extra!

Do watch the Video: https://youtu.be/SxqcJ21i2B4

Rattling sound was from number plates, they were not fit with screws, they’re just tied with tags