I had been following Ather 450X and was waiting for a model that can support 100Kms. When the Gen 3 model was released, I was so excited that I took my son and went to the Ather B U Bhandari center in Pune. It was a fair 1 hr drive from where I stay, but I always dreamt of owning an Ather, the Premium E Scooter. I was buying it for curiosity and experience, not for daily utility (I use my Car for daily office commute).

The experience turned from amazing to pathetic at the payment counter. The person at the payment counter were rude and insisted on charging 2% extra on the E Scooter. I politely explained that this is not permissible as per RBI guidelines and also as per the banking website of Kotak. I shared the articles with the Purchase department person. At this point the whole conversation became very RUDE. He was almost shouting at me, saying he does not care about RBI or Banking guidelines. Either I agree to pay the 2% or I am free to leave the showroom…

I did pay the 2% extra. But it left a bitter experience for me and my son. He was always impressed with Ather. But when he saw the behavior at the Ather Experience Center in Pune… his hopes from Ather to lead the EV revolution in India was shattered.

Its not about the 2%. Ather could have increased the price by 2% or 5% more and we would still have bought it. Its about principles and customer experience.

insisted on charging 2% extra on the E Scooter.

Why would they charge 2% extra? What is that billed as? The price is already set for the vehicle. Talk to customer care and let them enquire what happened.

Actually, it depends on merchant to charge that extra 2%. Banks charge this to the merchants for each transaction. The contract with the bank depends on business size of the merchant as well.

Merchants charge it to customers when they don’t have significant number of card transactions/profit to cover that additional 2%. So, while it has become a norm to pay by cards, it’s a burden for small merchants and that’s why they transfer this to customers.

Sure sir, Ather needs to grow, and thier parents have to look into it, the customer service is pathetic, they have no option to transfer calls for regional booking customers, and call forwarding is free to us, its okay there are charges, we called! We pay! At least answer and talk…

This exists in Ather website also and few stores also charge 2% extra which would be the commission for the stores that swipes the card.

Here is some feed regarding its illegal approach.

In this article, Kotak Bank explains why you shouldn't be paying that extra amount on your credit card transactions. 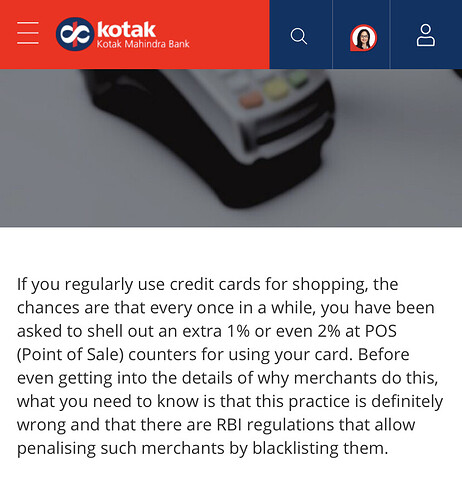 So it is illegal to charge customer for the transaction by credit card. But still Ather is following it.

I am not sure about whether it’s legal or illegal. But I know a shop which charges 2% extra for cards. When I enquired about this they told that banks always deduct some 2% from the amount swiped as charges amount and credit the remaining amount to their account. Some shop owners do not want to lose this 2% so they charge extra. It’s simple logic bro always the charges is bearable by the end user. Though it may be a Transaction charges or Gateway fees or NEFT charges(when we do visiting the branch).

Generally they have to increase the product cost to cover the card fees but in that case people doing neft or imps will be paying extra instead of saying card option is not available only bank transfer they are giving that option for customer ease. I am sure your credit card company would be giving you 1% or 2% loyalty rewards based on card and bank

Those are operation charges for facilitating that option to the company by bank.Yes this though as you said logical but by making this facility available company is ultimately benefiting themselves. Company is providing those services to get additional customer who is otherwise won’t be a customer.

There is a RBI ruling which I have stated above for the same.

Also I don’t know if there is any exception or amendments to that rule which if someone can point out. But as per the rule I know a merchant cannot charge customer for the same. This is an decision made to encourage customers and improve usage of cards.

This occurred to me as well. When I completed my payments in Bangalore JP Nagar, they charged me 2% as well. It’s not how it should be but I just ended up paying anyways…

This has been discussed many times right from 2019.

It is a grey area, cannot blame Ather fully here. They tried to be transparent and not to include this in their margin.

A business with low margin or wholesale market won’t accept credit-card without charges. Example: If you go to a branded apparels store, they will be happy to accept Credit card. If an option is there, they will accept Sodexo also. Such is their margin.

If you go to a cloth shop in Chickpet, the price for a similar / same item is sold at unbelievably competitive price. They won’t accept any card. They will clearly say to go to nearby ATM and get cash or pay 2% charge. Every % matters there.

So, which ever business doesn’t charge you 2% for credit card, it has been already considered in their pricing, similar to transit damage, returns etc.

If we refer to businesses who don’t care about profit and on spree to capture market share, they will give it for free also. So, no point comparing with them.

One more point to be fair: Until few years back, almost no 2W-dealers accepted credit cards for free. I am not sure if it changed now.

Faced similar issue in Pune showroom. I wanted to pay by debit card. I had informed the salesperson before all the documentation. He was had no issues with card payment. After the documentation was, loan was approved, he told me that card payment would cost me 2% extra. I refused to pay the extra 2%. When I reminded him that I had already told him about card payment. He simply said ‘main bhool gaya’! When I refused to pay the extra 2% then they offered me GPay as an option.