It’s a better option for them to survive, isn’t it? 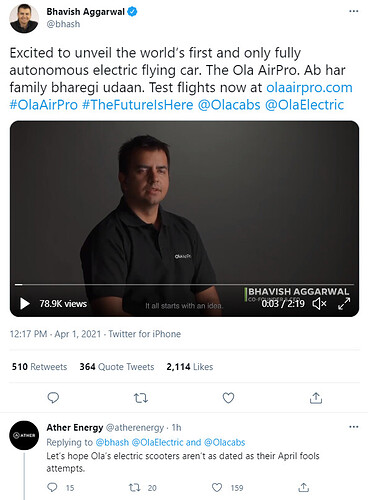 oh god. They sacked a few ather employees didn’t they? Have to get back at them somehow.
But if Ola does launch in June or even later this year. At the scales they’re going at. They’ll probably make a pretty affordable EV. At that scale it should flood the roads. Wonder why they aren’t revealing anything yet.

From what inside info I hear, there is a lot of design still going on and they have still not finalised many of the details as yet. Maybe that’s why the time…

details as yet. Maybe that’s why the time…

strange strange. I hope it’s bigger than the tiny appscooter.

According to HT Auto’s article,

"April 1st is celebrated as April Fools’ Day. Every year, this day pranksters and jokes galore and spread cheer without any hard feelings. " 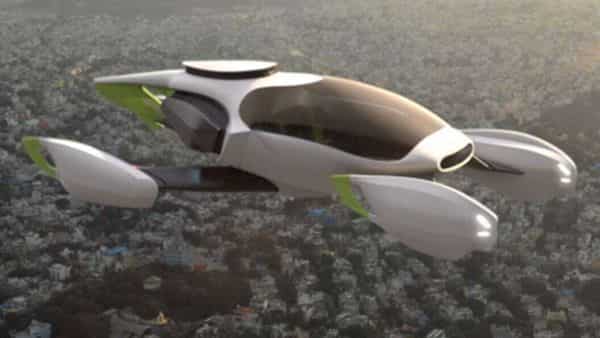 Made of soft drink cans from shivajinagar

Agreed. I also checked the website. It says the vehicle will have infinite range.

Jokes apart, I haven’t seen any news of space travel over here. So, I believe that, if someone’s interested, below is something one should read, coz it isn’t a joke…

April 1st is celebrated as April Fools’ Day. Every year, this day pranksters and jokes galore and spread cheer without any hard feelings

I wasn’t referring to this flying car

As per Ather, it took 9 months and Rs 130 crores to set up their new Hosur factory with an annual capacity of 1.1 lakh scooters and 1.2 lakh battery packs with 90% of localization. So, it may take 4-5 months more than what Ola is claiming in their roadmaps.

As per Bhavish (Ola Electric CEO), they will reveal the first scooter (slightly modified Etergo Appscooter) in the next 1-2 months. Most of the design aspects are completed by Etergo long back. Ola may say, they have changed a lot of things to suit the Indian market but those will be minimal in my opinion.

The biggest advantage for Ola Electric is its ability to raise money due to Ola’s background. History of Ola Electric’s funding:

These funds provide a great opportunity for Ola Electric to go for scale, unlike other smaller startups. In comparison, Ather Energy the most successful EV startup in India raised ~Rs 1,000 crores till now. So, based on Ather official press releases for the Hosur factory, Ola has secured enough funds for the production capacity of millions of vehicles per annum.

How @ravneet.phokela : ather :: Yongsung Kim : Ola Electric.
Hyundai and Kia are investors in Ola Electric. So makes sense I suppose. But they speak of global expansion when they haven’t even revealed a product. They speak of lime of EVs across globes. And there are talks that they haven’t finalised tbe product that will be on indian roads in a couple of months 🤷🤦

Isn’t the product almost revealed when they have shown the images last month? It’s an Etergo Appscooter with minor modifications.

Ola CEO already announced that they will have a separate event for the scooter reveal sometime in May. The timelines may slip just like every other company that is introducing EVs.

Impressed by this. I wonder if Ather’s factory has done something comparable because it would make so much sense to do this. Going electric is all about reducing carbon footprint. it only makes sense to take every opportunity to minimize other sources of footprint as well, like manufacturing. Good karma and good promo for the brand.

Isn’t the product almost revealed when they have shown the images last month?

That wasn’t a reveal

All of us had seen those photos already. The same etergo ones. But we have more info about simple energy than Ola electric. Official info and not speculation. Simple energy may have some extraordinary claims but at least they have a claim about the product. Here ola has claims of global sales and global expansion

Again, the timelines may change just like any other EV company. Hopefully Ola completes the factory and launches their scooter as early as possible.

Coming to green factory, I would rather have Ather make a cheaper model that sells in tens of thousands per month than few solar panels on the roof or plant few trees around the factory.

They are not claiming that they already expanded

I mean, the claims of being able to hit sales figures of 10 million a year within a couple of years.

Entering global markets, especially with EVs is not difficult

Yes yes. As proven by all the EVs in india

and the quick expansion of Tesla across the globe. Jokes apart. Ev or non EV it’s always hard to go global. Especially for a such a young company. I hope they pull it off. But the immediate need is an ev for india. I’ve heard the CEO speak about global expansion and about the factory more than hearing him speak of the product itself. Ather’s step wise approach might be slow. But I think that is allowing ather to mature as a manufacturer.

much more difficult than exporting EV 2 wheelers into those markets.

Really? I just assumed setting up an App and hiring drivers who bring their own cars is easier than shipping automobiles across oceans.
All this doesn’t matter if they can really bring the product in good numbers onto indian streets by the end of this year. A good product.

There are Chinese companies like Niu, Super soco, etc… that already sell their ev 2 wheelers in many European countries already. You don’t need to setup factories in those countries as taxes on CBU imports won’t be as high like in India.

Agree about tall claims of 2 million capacity in 1 year and 10 million by 2022. Those are absurd.