Bengaluru to Dharwad on my Ather 450

Yes. He will be riding it to Hubli. We are meeting in a while near mattikere. if youre free you can join us.

As soon as he sends me ill send you

I thought so. Not sure where to get recharge on way to hubli.

he’s got everything covered. 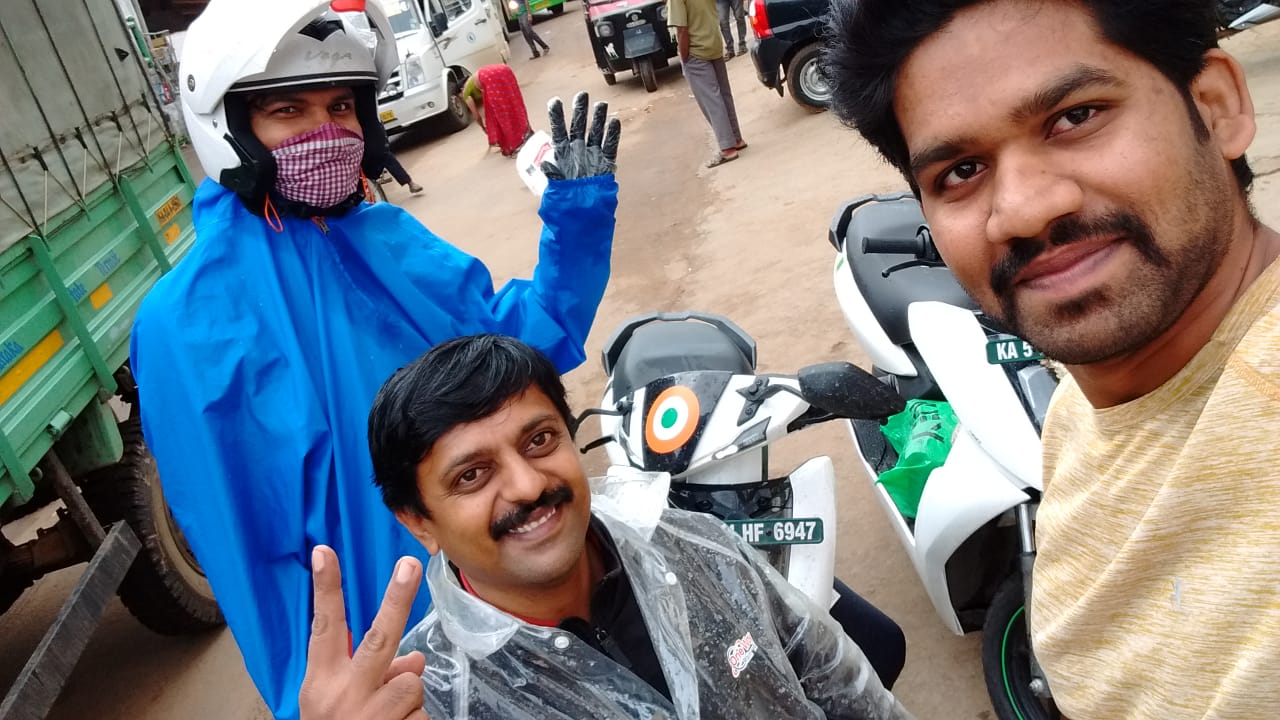 Super saaar! I was waiting for your message! Have a safe journey!

I can see another Ather! Who is that?

It’s none other than @Abhishek!! The all rounder!!

Of course it is!

I met them before they left. That’s when Abhishek decided to go.

Do you mind posting your ride stats ?

Trying to call them. They seem to be busy riding

I wonder what happened ?

Update on a call - they are able to achieve 100 km true range on ride mode.

They are currently at Harihar. Having lunch.

reached Dharwad (at 3am) along with Dr.Chethan who is enthusiastic enough to plan a ride on his almost first day of his ownership

am starting now… back to bang

Hi Suraj, Ya will share shortly… as I’m busy answering many people’s questions.

Hi All,
My Journey with Ather started in July 2019. I was since Dec 2018 was searching for a new & proper 2-wheeler, as I saw a pop up ad on my phone on 08th July & thought of a test drive on 11th July 2019. As I work at DHARWAD as Assistant Professor at a university, I couldn’t afford a test drive there…
But as in Bengalur on 11 & 12th, so booked a test drive online. Made a serious attempt to understand the vehicle during test drive. It really made sense of putting my bet on the vehicle, but as I’m an vehicle enthusiast & prefer long drives, now only with 4-wheeler. I was sceptical about that with a EV & my doubt was true as per the explanation of the people at Ather space. But still never really wanted to try it from Bengaluru to DHARWAD.
On 21st Sep with a 2 week delay from scheduled delivery, I got the call from Ather executive asking me whether I can be at Ather space on 22nd, Sunday to pick my vehicle…
I was with full excitement accepted it & took my vehicle’s delivery on 22nd September. But the bug was biting me still about a FIRST EV drive from Bengaluru to DHARWAD. Had no alternatives planned like by train or in goods transport. So, planned to start on Monday at 5.30am but surely had my own sceptics looming lot…
… cont.

The next part of return journey of Abhishek to Bengaluru on 24th from 9.30 am onwards would continue from his post.

We could connect both the vehicles in quick time, but the issue was both were not changing from single line of 32A 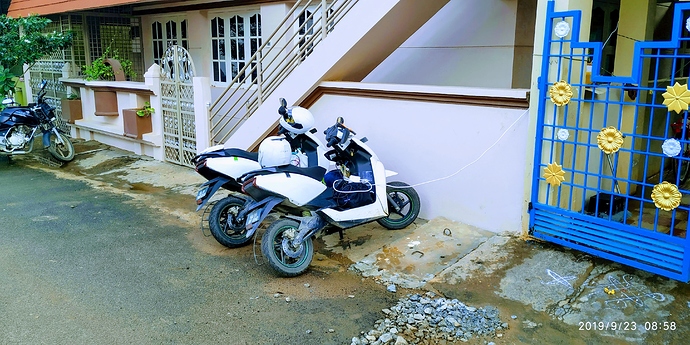 Pathetic of all was even a electric 2-wheeler dealer denied us a charging time for a while, which made us feel out of options now 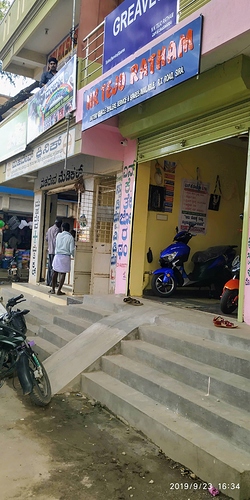 So walking around the corner, I found a tyre dealer shop & he readily allowed us but only one point. That in such circumstances was more than enough & I asked Abhishek to start his vehicle charging. Just next to which was a fruit juice centre & a hotel, just tried my luck & to my pleasant surprise he too obliged pointing to two points available outside the shop. 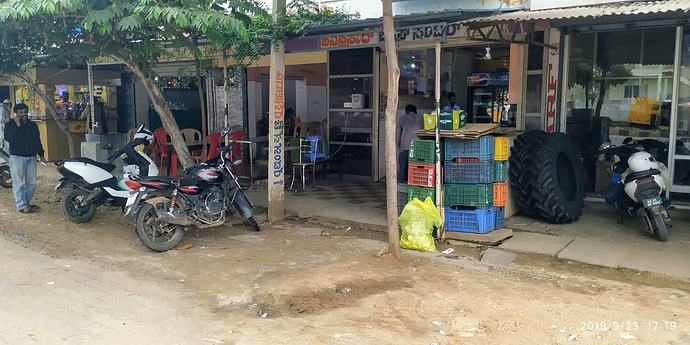 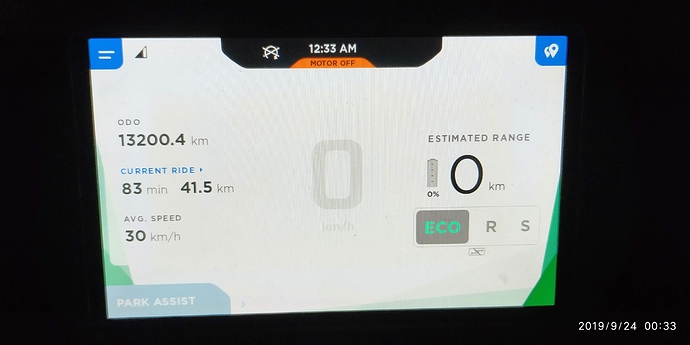 had a quick break & top up too at my very old friend Harisudhan’s house, that gave us 30% on top so to reach Chitradurga.

Tried some permutation-combinations & got the earthing right for both the vehicles by sharing one point set by Abhishek. 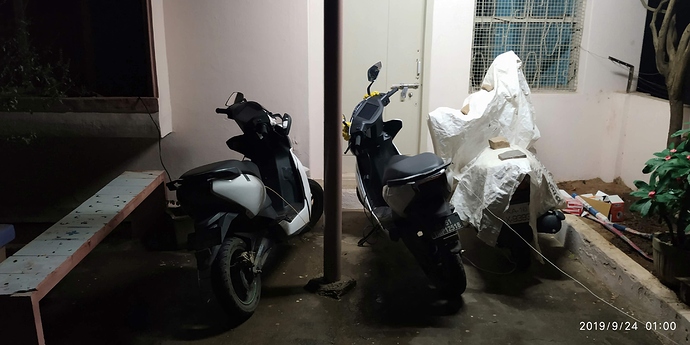 Dhaba run by a couple whole heartedly offered us help to charge our vehicles, but it was almost 2.00pm by then 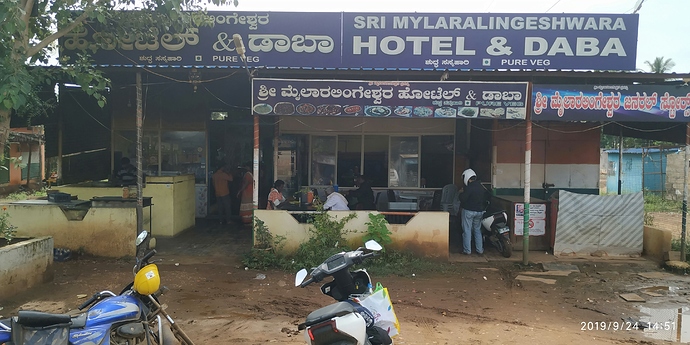 The owner, when asked for the help without any delay offered us the po 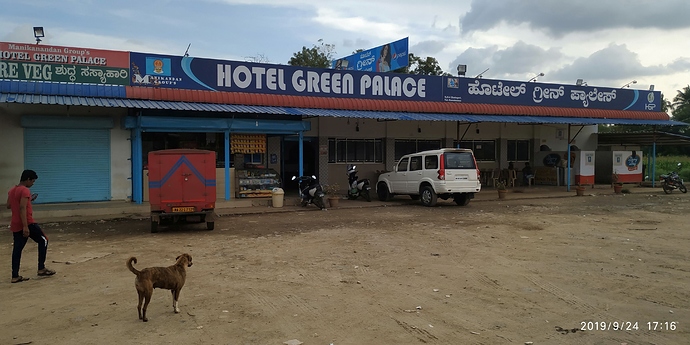 Got the help, but with proper convincing that it would not take more than a unit of power for 1hr charging & paying them for the time to charge our vehicles. We paid them Rs. 50 per vehicle 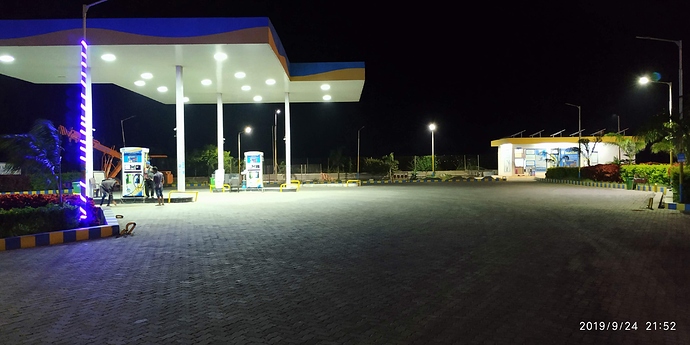 As we gave our try, the guard being very co-ordial, easily gave us one point available for us to charge. 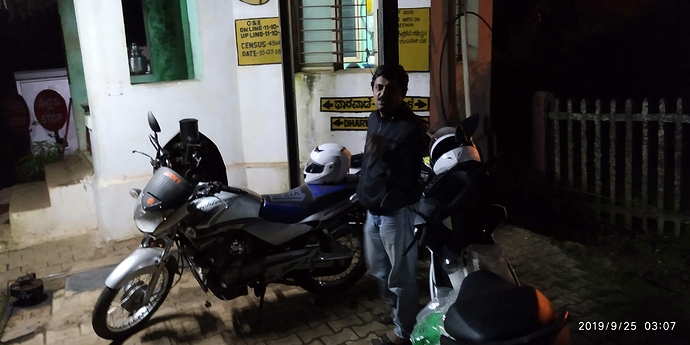 Finally, both of us could reach my house at 2.30 am on 24th September 2019.
Thanks everyone who made it happen. 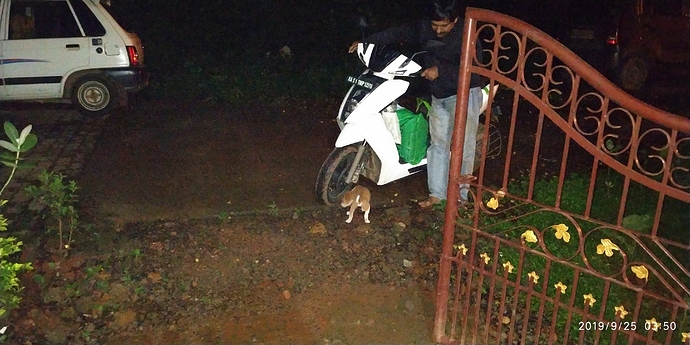 Great to share with you all that there are atleast 4 enthusiastic buyers who met me in last week, took a test drive & said they’re booking one very shortly. Among those was one so cute childish but so nice a guy Mr. Kulkarni, whom I happened to meet at Sapthapur. He came down to me like from no where & started with a great pleasure on his face, he ran to me near my 450 & was so overwhelmed to see the vehicle which he meant had seen on internet & was planning for a test drive at Bengaluru experience centre, but for his surprise he had got a chance at DHARWAD itself. In that moment of enthusiasm, he even asked me to wait & called his family & introduced the vehicle which he had planned for his daughter & also took a test drive with extra feel… myself felt really a happy to have done this for Mr. Kulkarni, a manager at KVG bank.