I have an always-on VPN configured on my phone. Ideally, I’d want all of the traffic to be routed through the VPN. But Ather app somehow doesn’t play well with VPN. It just says " Please check your Internet connection" when every other app on my oh one can connect to the internet.

Can someone take a look and resolve this? Right now I’ve to allow an exception for the Ather app which completely defeats the purpose of having a VPN in the first place. 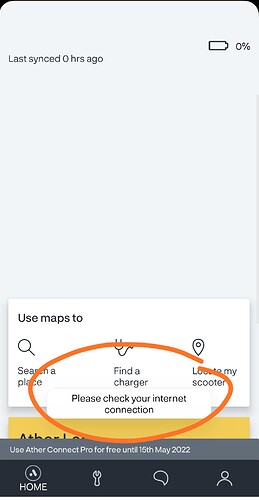 Which VPN do you use? I have checked with 1.1.1.1 VPN and it works without any issues

Besides don’t worry much about the VPN connection just turn it off and open the app. Whatever way you open the app there will be no changes in the app.

What do you mean by that? That’s a DNS server. Not a VPN.

Sir, i dont have much knowledge of dns server or generic wire of what you are saying. I use 1.1.1.1 vpn in which i am getting access to blocked sites and with 1.1.1.1 vpn only Ather app is also opening.

Maybe a different use case for you. I’m using VPN, for privacy rather than to access blocked web pages.

I hope some other people on the forum are also doing this.

Same issue here (on Android app). I have uninstalled the app for now.

Thanks, @DurgaSwaroop for creating the post. I had planned to debug the issue earlier but didn’t do it.

I debugged it now and I guess I found the issue. Ather Android app uses a function called isNetworkConnected() in com.athermobileapp.utills.NetworkHelper class. This boolean function likely tells if there’s a network connection or not.

For Android versions M and above (SDK_INT >=23), the function checks if the active network capability has transport of TRANSPORT_CELLULAR, TRANSPORT_WIFI and TRANSPORT_ETHERNET. But it doesn’t check for TRANSPORT_VPN. This is why when Ather app fails to connect to the internet (when VPN is enabled).

@abhishek.balaji Can you please tag any Ather Android devs in the post/send the issue details to the team?

Awesome. It would’ve taken me quite a while to debug this. Good that you’ve already done it. Let’s hope they will update it soon.

@abhishek.balaji, Is this something you can get prioritized? It would help a lot of users that have “Always On VPNs”.

I see that the latest android app works with the VPN on. Can you confirm this @DurgaSwaroop ?

I still get the “Please check your internet connection” error.

@abhishek.balaji , Any updates on this? Should be an easy fix, right?