Has anyone faced issue regarding central part of touch screen not recognising touch at all like current ride,trip meter and once in setting menu errors documents? And maps randomly getting selected ?

Yes, I am one of the victim. It does not work except the corners. I am yet to log the complaint.

@rajeshkav Is this different than intermittently not recognising touches which was there since Day 1?

It is not intermittent, it is NOT working at all at Trip Meter area. I have tried all sorts of known methods, such as soft and hard reset. It does not help

Yes I’m having this issue, it should be a common issue. I’m ignoring it.

i have this as a common problem now for a long time.
i had reported this twice, the first time i was told that there is nothing wrong, but they still did reflash the touch panel firmware or something. However, when that didnot help in any way, the second time when i went hard on it, they took the vehicle for check again and later was told that they have replaced the touch panel as it was within warranty.
i still see no major change.
The only change i saw(may be it was only a learning for me) was that it is not just the tiny arrowhead that was the trigger area but touching on the trip name too would lead to changing of the trip meter. Well that change does happens but with a lot of struggle.

for now, after 2 attempts i have given up on that

Actually after flashing touchscreen firmware my response issue is resolved it is now as good regular mobile touch response.

Was this firmware upgrade done at your home or Ather Service Centre?

Firmware Update was Done at home only. He will remove dashboard to access USB Port to update. 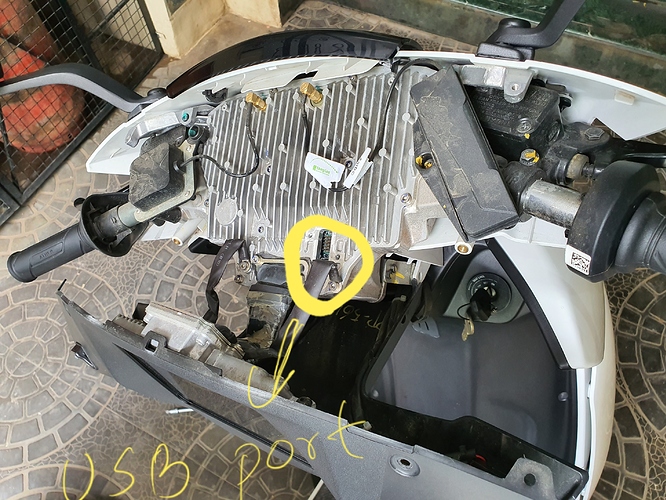 I m desperately wanting this… Because every day, I change brightness morning and evening manually to highest and lowest.

But, 7 out of 10 times, it will require infinite tapping.

I was also the victim of center part of screen not respond issue. They replaced the new screen. I doubt how reliable through out the life cycle ? After warranty we have replace from our pocket. If its failing withing 7 months.

Give resolving this issue another chance maybe 3rd time you get lucky.

How do you check the firmware of the touchscreen ?

Look at those GPS and 3G antennas on top of the brake fluid chambers.

So huge antenna, yet reception is very poor

Our mobile phone antenna works better than this !

so theoretically ather can upgrade 3G Modem to 4G right with space being not a issue ?

So why is such huge heat sink required for touch screen module ? or it is for any other purpose ?

after connecting usb he ran some batch file which while initializing shows current version and will flash it with new firmware.

Interface to this modem from ECU (say heart of 450) should be same.
However some coding needs to changed on SW front.

IN one line answer, this is doable but requires effort and ₹.

I am hearing two answers for this issue from two users. First, Firmware change, second one is display change itself. I have raised a complaint and will keep you posted on outcome.

Nothing to worry about

A few instances of this issue have been reported to us. If you have faced a similar “touch non-responsive issue” reach out to the customer support team and they will schedule a service request to resolve it.