My ride statistics in my mobile app shows my recent ride only till 2 April 2020. The odometer etc are up to date. Several times I’ve reported this issue in the app or in email, Ather only promptly replies that it will be sorted in a week. Also I’ve shown my Vehicle and mobile in person to the Ather executive at the Experience centre. But not validated till date and again and again they ask for App version, mobile details and last available details of ride!

Even I’ve the same issue and the issue has been reported 3 times so far over the past 2 months. I’ve received emails that they’re working on it. I’m still waiting for the solution.

This issue has affected the usage report also and impacted my Q2 2020 reimbursement as well. The actual units consumed and the distance travelled by the scooter, the distance and consumption shown in the usage report and the consumption reimbursed…all three are totally different and not related to one another. I keep a fairly detailed log of my scooter (all my vehicles in fact) and I have data of what and how much is not matching.

I saw your post in another topic where you’ve mentioned that you’ve not got reimbursement for Q2 2020. Maybe this is the reason for that.

May be the reason that they couldn’t process my reimbursement also. … But the app is only mirror for certain activities stored by back office which can be displayed or intimated from the vehicle… As my vehicle showing proper GPS and traveling when on riding… Full ride details up-to date can be recovered. I think Ather should allott a specific personnel for funding the technical glitch and solve it. Hope they do it earliest and also my Q2 reimbursement to be done may be with interest

Today evening, all my ride stats from July till today have appeared. Till yesterday There was no ride statistics seen after June 15th. After this update, I think my ride stats of Q2 are gone! But both my tickets for sync issue and incorrect reimbursement are still open and I’ve not got any communication from Ather. So I assume they are still working on it.

Months have rolled from April to September. Hearing news of faulty reimbursement of Ather Connect. …hmmm. my ride statistics still idle at April 2…and no reimbursement since daily riding is not get updated… So many mails sent… But prompt replies stating to hard reset and our backteam under rectification. I may upgrade to 450x… But will they accept the vehicle with current condition… To be specific my vehicle under lease with autovert…

Shouldn’t have happened, have raised this again internally, will get back to you in a few days on this.

Mr Abhiskek.balaji… this issue of wrong reimbursement has been raised in month of april for jan to march payment… i was reimbursed with only 6 units of amount of 49 rs. this issue is long pending with you and you people have totally forgotten… maybe this is what happens when a company becomes two years old and you people will forget us who supported you initially

In December 2019 I had reported this issue as my ride stats didn’t sync for 15 days. Ather team took atleast a month to fix this. I had even asked if this issue will anyway affect reimbursement but CS confirmed me that this issue won’t affect reimbursement amount as they have the correct data in the backend. I will have to again open the 2019 ticket and have to ask them to re-check. I still face this issue at times. Now I understand the whole picture.

A few minutes ago I got a reimbursement (second one) for Q2 2020. The total of the two reimbursements is close to my estimation of what I should’ve got in July.

I had ridden 0.9kms, 9.6kms and 102.7 kms in Apr, May and June respectively. In comparison, the ride statistics showed 0.7kms, 5.0kms and 30.9kms. Due to this, I got a reimbursement for 0.8 units only. Even with a pessimistic estimate of 20km/wh (excluding drain), I should’ve been reimbursed for 5.6units. I had reported this syncing issue two times and the reimbursement issue once. I had got a reply that they are working. Finally saw the below update yesterday.

A couple of owners had reported that there was a difference in the reimbursements they had received as part of the Ather One 360 subscription, and their actual charging sessions.

As we looked back into the data on charging sessions for previous months to identify any discrepancy, the April - June quarter stood out. One of the key reasons for this was that during the lockdown, many of us ended up plugging in our Ather 450s for longer than what we usually did, sometimes for days or weeks at a time! This resulted in a few charging sessions being missed when we calculated the reimbursement amount for the April - June 2020 Quarter.

Thanks to the community members reporting this, we were able to fix this discrepancy in the charging sessions recorded. While for a lot of you, the discrepancy is just a couple of units, we’ll still be reimbursing the amount missed for all those affected, by October regardless of if you’re under the Ather One 360 plan currently.

Today got a reimbursement for an additional 5.9 units. Taking the total reimbursement to 6.7units. The consumption of 6.7units for 113.2kms is very high but this is because, during Q2 there was a lot of drain. Many times, I’ve lost the complete charge without even riding even a km.

The charging units issue seems to have been solved. Hopefully Q3 reimbursement will be correct because the issue of ride statistics not syncing in the app still remains- In both Q2 and Q3. In Q3, I’ve ridden 6.2km, 129.5kms and 0kms in Jul, Aug and Sep till date respectively. The ride statistics in comparison show 6.1kms, 101.0kms and 0kms.

Edit: I got the below email too regarding the same 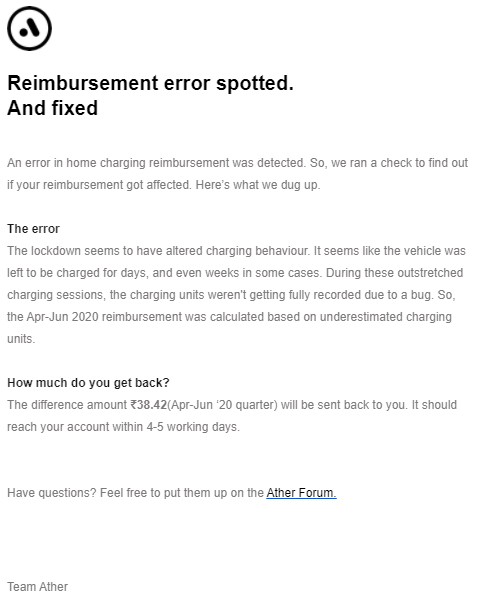 My odo is perfectly synced with dash. But the recent ride statistics and projected range is very much struck at April 2nd… . My app shows promptly charging percentages and notifications but sync tfrom dash to app is in incognito mode for rides performed and electricity consumed

Same case here…odo is in Sync. Charging percentage and notifications also are alright. Till last month, Ride statistics were stuck in May. Got those back and Now the last ride showing up is from 13th August.

From this quarter onwards according to new plans there is no reimbursement. If you have an running plan the previous plan continues until it expires. After that new plans are applicable.

Though my ride statistics was sorted in September… ( …from April). My reimbursement from April is yet to reimbursed…

After many days I decided to follow up on my ride sync issue. Although I’ve more ride stats appearing on my app, there are still some rides missing. The issue isn’t completely solved. I was still under the impression that they were working on solving it.

Called up customer care and I was told there are no tickets open for my vehicle. I was asked to open another. I agreed closed the call. While reporting, i took screenshot of ride stats to give details. While at that I found couple of other new issues.

Let me explain with the below screenshot…

There is a 2.1km ride from Dodda Aalada mara to another location (ranch restaurant). This was part of tge Ather Republic day ride. Now after that, there should’ve been a ride of around 22kms back to my home which is missing!

The next issue of ghost ride is that on 30th January. I went to Vidhanasoudha for the EV rally. The starting point is shown as Dodda Aalada mara whereas it should’ve been my home location which is no way related to that road! However the Pin code is not of Dodda Aalada mara but is close to my home(but still not accurate).

But even if I ignore the starting point, it should be a single ride to Vidhanasoudha and not two different ones as shown here. I Don’t know how it split at MN Krishna rao park when i hadn’t stopped there at all.

All in all…ride stats is incorrect, inconsistent and unreliable for me.

Add to all these the home charging reimbursement for Q42020 is yet to arrive into my bank account!

Add to all these the home charging reimbursement for Q42020 is yet to arrive into my bank account!

I got the reimbursement of Q42020 a few minutes ago. I had to follow up twice in the last 2 weeks - once I was told that my bank account details aren’t visible in my account. When I logged in, strangely it was not there! even though I had not logged into my account (forget changing bank details). I updated immediately and yesterday when I called again, I was told that I’ll get it by Feb end. Today I finally got it. It’s matching the expected value based on my rough calculation

The rides not syncing issue is till unsolved, the ticket is still open and I’m told that teams are working on it to find a solution. I badly wanted to look at the ride statistics of my ride Ather factory…but alas!

Because of this open issue, my Ride logs are also still not available to me. The last correct Ride log I received was in November 2020!!!

Thanks for remembering. I haven’t received my Q4 2020 reimbursement till now. I was having ather one plan till mid nov. Will contact CC

Looks like your reimbursement was initiated, but got reversed, it’ll be processed as part of the next cycle, in early April.