A huge shoutout to everyone who took time off on a Sunday morning to attend the Owners Meet. Some of you couldn’t make it, and we are summarizing some of the updates shared in the meet.

This is going to be a longish summary, so strap in. We highly recommend that you read through the entire summary, but you can also jump to the relevant section:

Work on the new Hosur factory is progressing well, and we expect to start production in early 2021. The aim is to have 4 lakh sq.ft of space, which allows us to make more Ather 450Xs and get them in your hands across the country!

We shared some data about how owners have been riding since the last owners meet.

Longest trip on a single charge: 135 km! Read more about this

During the lockdown, we saw a 60% drop in the distance per day, but this is picking back up.

Cumulative ODO reading across all Ather 450s on the road has increased by 3X in the last 10 months! Now, it’s 15 million+ km!

Highlights from the community

It’s been almost a year since I joined Ather, and since then, the community has grown quite a bit! We’re 9300+ strong, with 10+ city groups and more than 3.5 million page views on the community. It’s amazing to see how the community is growing, and we are all set to welcome a lot more members in the community!

We want to make sure that the forum is accessible and approachable for all users. To help us with some insights on what to work on or fix, we did a survey among our users, and here are some findings:

These are some of the key feedback points that we decided to address for now. Keep the feedback coming, and we’ll keep improving the forum.

There have been a lot of group rides planned, and in the next few months, there are going to be quite a few online events. We want to make this simpler without needing to jump between different platforms. Now moderators and admins have the ability to list events on the forum and you can RSVP right here. If you’re planning an event or a group ride, reach out to one of the moderators/admins for help in setting this up.

Something that’s been long pending, feature requests are now compiled in #feature-requests. Submit your asks over there today! Our product teams check the topics for new features to work on. If you see a feature request already submitted, upvote to show your support as well.

Enabled right now for issues and support queries. Lots of questions come in, but these topics are open even after answering. If you ask a question, please look at the answers and mark a solution as accepted. This helps others a lot and saves effort for new folks to read tons of replies before finding the info they want.

Better onboarding/introduction to the forum

We’ve rolled out a bot on the forum, @A-bot that can help you understand basic features and functions in the forum. DM @A-bot with “start tutorial” and it’ll walk you through the forum. We’ve also published a detailed user guide at forum.atherenergy.com/faq.

Scaling up the forum

As we scale up to new cities, our community will see a lot of new users joining in. Ather 450 owners are among the first in the country to make the switch to electric. The community played a huge role in making that switch smoother. For the newer folks, we are the ones who can be the catalyst in making that change happen.

When new users join in, help them with tips on forum usage, queries on vehicle usage, your review of the Ather 450, and much more! Together, we are leading the change to EVs in the country!

Scaling up also comes with more of our community members becoming leaders. While the current 5 moderators are brilliant, we’ll have more roles open in the coming months. If you’re interested, keep participating in the forum. We’ll reach out to some of you soon to help in building this up.

Finally the section that everyone’s been waiting for! Sharing a little bit about what’s in the works on OTA and App Updates, and Ather Grid.

The highlight feature of the next OTA is theft and tow detection. Something that a lot of you are asking for, this will alert you if someone tries to mess with your Ather 450. As an owner, a lot of us are unsure of parking in shady locations and this will give you some peace of mind. You’ll get an alert if someone tries moving or lifting your vehicle. This, along with the remote location tracking on the App, you can park anywhere worry-free.

A major redesign of the app is in works. @chaitanya.hegde notes that there are a lot of features underway. We’re not happy with the design and layout of the current app. You can expect a new version of the app around the time Ather 450X deliveries begin. We’ll of-course be doing beta programs and early access before the full rollout.

Ride statistics on the app are pretty insightful on how you ride the 450. There are a lot of us who love showing those long rides or achievements off, but it’s quite cumbersome. You have to scratch out the start and end locations and crop the screenshot. We’re working on a way you can get a card with your important ride data, that you can share on social media and on the forum!

Here’s a small sneak peek of what it’ll look like: 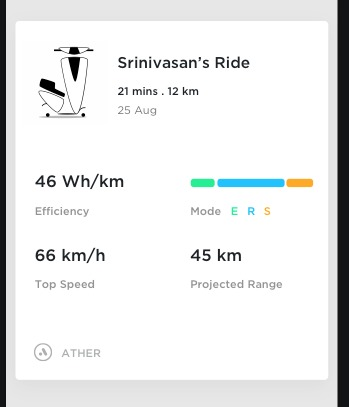 Yes, we know we promised many many locations in Chennai and Bangalore. Over the last year, there have been some roadblocks in making this happen, but we have a solid plan.

These partners would help us scale up Ather Grid in newer cities, and add points in Chennai and Bangalore as well.

Updates on Ather Grid locations in Chennai and Bengaluru

Over the last few months, a few of our hosts had to shut down their businesses due to the pandemic. A few of the locations needed repairs but we haven’t been able to send personnel to the locations to fix them. The Ather 450X is also coming soon, which means the points are also getting upgraded. We’re getting new hardware to enable charging at 15km/10mins for the 450X. The newer hardware also makes it more reliable and has 4G inbuilt.

Here are the new locations in Chennai and Bangalore. They are subject to final installation, but we’ll make sure to update if this changes.

And, Ather Grid will continue to be free for a while. We also won’t be making Ather Charge available, so even those not on any subscription plan can make use of the Grid.

We want more feedback on the locations, the hosts, and the convenience of Ather Grid. So continue to use them, and try them out if you haven’t already.

We’re working on getting all questions posted by Owners in the Meet answered in the #faqs section. Will share an update in the next few days once that’s done.