My New 450X and my initial experience

Hey there !!! This is Surendhar from Chennai and I took the delivery of my 450X white which i named it as space x Falcon…

in the first week of this month. I booked it on 22-02-2022 and though the waiting time was really painful…but, oh man !!! the wait was worth when I laid my hand on my very own 450X on the day of delivery. Here are the few pics during that happy day… 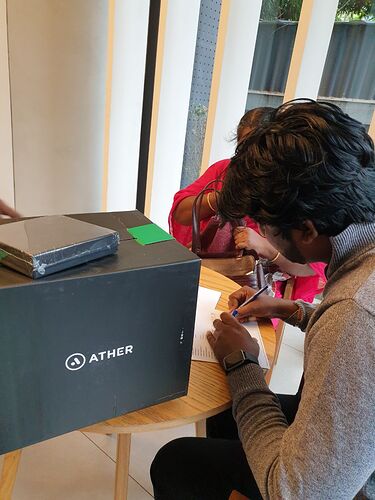 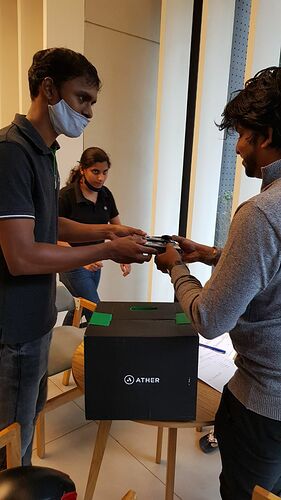 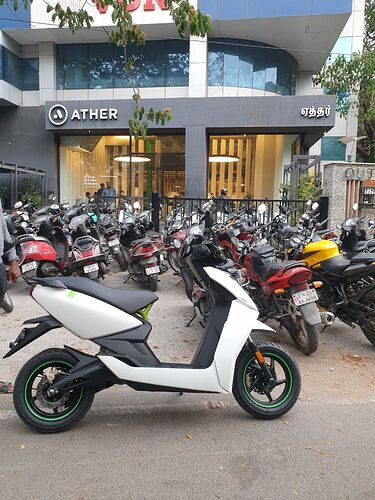 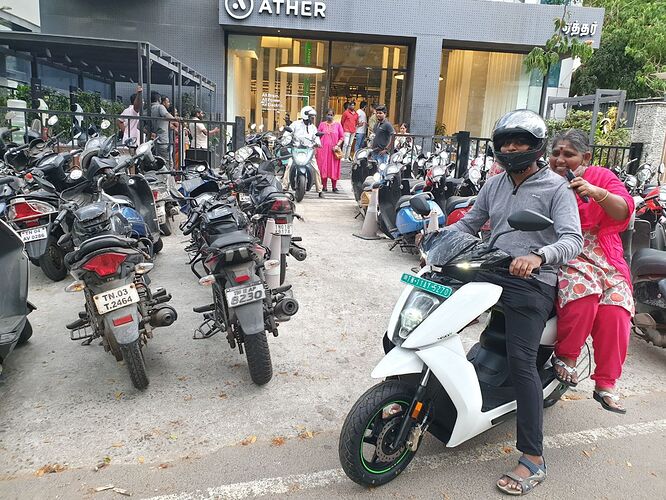 photo_2022-05-25_09-21-221280×960 332 KB
it was at that time when i understood the importance of rear foot rest... After taking the delivery with my Mom and my friends , headed back to home happily and started riding on a daily basis. Have to admit this machine grabs attention in roads among public at a huge level.. 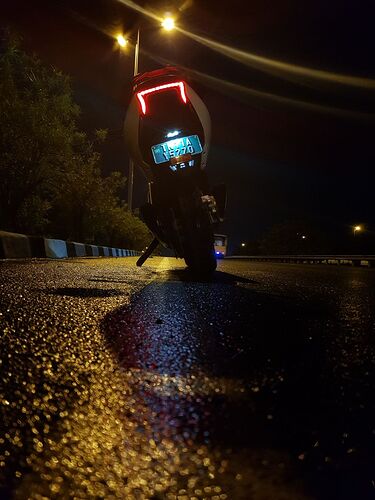 photo_2022-05-25_09-30-46960×1280 164 KB
People question you about it's range first...the typical indian question..."evlo mileage sir idhu ?"... :joy: :joy: and then when you explain them this is the official range , but since it's a AI enabled vehicle, it gives you range better than the rated depending upon your riding style and pattern...Blah ! Blah ! Blah ! Lol..i still remember during late night when myself and my friend took ather for a spin...we rode in a mixed up modes so, the energy consumption was a bit higher and so Falcon ran out of juice . when i searched for Grid point , there was one available nearby at a distance of 3.5 KM and guess what, the predicted range was alsl 4 KM . And that was the time I witnessed the precision of the available KM to drive with the remaining charge calculation. And then i plugged the Falcon for a quick juice up. 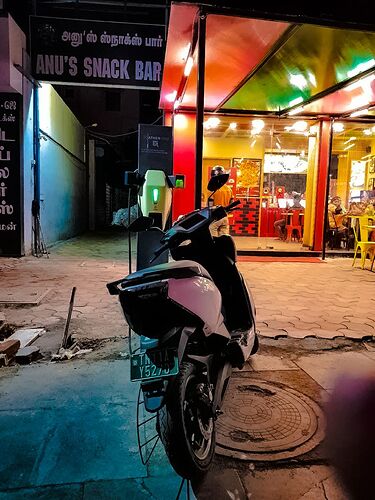 photo_2022-05-25_09-30-53960×1280 232 KB
And after few moments a food delivery person saw the vehicle getting charged and he started making a video call showing the vehicle to the other person on his call.. I didn't mind him clicking pics of my vehicle after sometime he came to me and asked..." Boss is this your scooter..???" and we spoke for sometime and then after shooting a lot of questions and doubts for about 15 to 20 minutes he left.. And again he came back and asked me..."boss..how much did you pay to charge your scooter here at the grid...? and when I replied him that it's free and it's free since a long time...believe me...it took some time for him to digest.. And after say 30 mins. the range was up by 50Kms. And we headed back home.

photo_2022-05-25_10-34-27623×1280 58.1 KB
And happily completed 500 Kms in a week and everything was going fine, until the unfortunate day came. It was bit early in the morning , was around 6.30 to be exact. I was coasting in the left lane at around 30-35 Kph and within a fraction of second an auto which was speeding tried to overtake me just touched my rear right panel and i lost my balance and dropped my scooter. Since, i was riding it slow there was not much damage to me but there was some serious damages to the falcon at the panels, throttle , brake lever etc..

photo_2022-05-25_10-34-25588×1280 115 KB
the auto driver tried to false accuse me by saying that i was the one who drove fast. And guys do believe me that was the time i realised the importance of drive stats. And showed hime that i drove at a very low speed under speed limit. and then he went away.. And by that time the build quality of Falcon proved me once again.. for a fibre body these damages were very little..when you can see the damages caused to that speeding auto. And then i called upon my friends for help and we went to hospital ,did some first aid and we reached back home. And after some days of having sufficient rest, I took my Falcon to ather space for a repair.. and just had a small shock to see the estimation of repair... all the replacements i.e consumables along with labour , the bill came around 18K , though insurance agreed to cover about 13.5K, the damage was a lot bit high. And they did inform me during purchase that the parts will be on the higher side. and I'm about to go and take back my vehicle from the service since i got a call saying that work on my vehicle got completed. speaking about the !st experience, I saw Ather for the first time in 2019 when 450 reached Ather space at Nungambakkam and i fell in love immediately .The ride was really different, the silent moves, sounded very different by the belt drive system, it sounded like a Boeing which will pick a pace when take off. the quality, subscription plans, features just impressed me a lot more. But, by that time I was working out of station by then. So, wasn't able to get one . As soon as I reached back Chennai I started planning to get one for myself. It was at that time in when Ather released a teaser about 450X. After few months 450X started reaching Ather spaces and when i saw that for the first time , to be frank except the front visor i didn't notice much of a change in the design part. But the riding experience did prove me wrong. In particular ride comfort, warp mode, refinement etc. I still remember when I test drove the 450 back in 2019 first time the ride was a bit rigid. Whereas in case of 450x, a year later the riding comfort was improved significantly especially the pillion comfort. 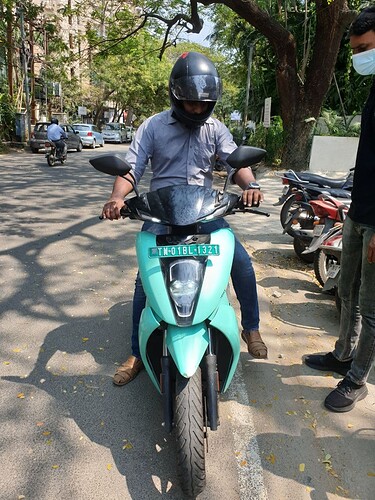 And I still remember i took my cousin to Ather space to show him the 450x, he didn’t understand it first, he questioned me whether it would be able to pull 2 people on-board. well that was a wrong one to shoot out for this kind of scooter, i asked him to hop-on and once we reached the Main sterling road, switched the driving mode from ride to warp, and gave it a full throttle. suddenly he got speechless for a moment and started to grab me tight… during that time there was a guy coming at least at 70Kmph in his bike and within no time we overtook him and reached the signal… And my cousin said “well that was a wrong question…, do get me back in normal ride mode” 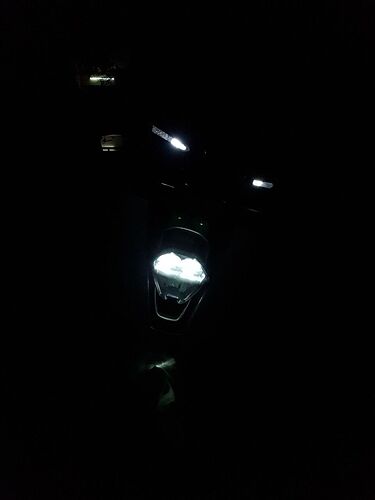 Congratulations on your Falcon🤍, mine too White😜

Amazing bro…! I just got mine on 22nd may which is on sunday i booked on 6th of may and got it by 22nd of may here in vijayawada, andhra pradesh the riding experience was really speechless to my family members because when i told them that i pre booked an electric vehicle they were very disappointed due to the electric vehicle battery blasts and all but when they saw the tech and what Ather did at quality now they are like you took the best choice i am happy just crossed 250kms odo.