To start my horror movie just like any movie which has a good start then a good play and an unknown ending So after a long time, a friend and you start to actually plan to have a nice dinner in a fancy restaurant and have a pleasant dinner.

So to start with the ride and curse it at low speed because you have just 9 Km to go and a sharp left turn on a flyover to go. but I switch to ride mode because (i forgot to charge)

The ride was going smooth I was enjoying to company and talking and bam some boom, a Tud-tud noise from the left-hand side of the scooter` started to come, I thought the rear tyre blew and it was a puncture, man I was wrong, both the tyres are inflated and good to go, so I tried to drive it a little and huge vibrations started coming from the floorboard, it’s so big that entire scooter is shaking.

There goes my dinner plan I thought, so we decided to go along with it because it was night and we are in an unknown area we could not find what was wrong, the scooter will shake like an unbalanced motor or wheel dancing on the ground, Then after reaching the restaurant, Hoping to call the Ather Roadside Assistance, thinking whether they will come or not (wait for more suspense) So-called them up and the person on the other side received my call and just hung up

before I could even say Hello, so called them again this time they picked up and could not hear me I guess, But I can hear them loud and clear. so I tried calling them again call didn’t go through.

After seeing me, my friend said let’s just eat and slowly ride back home, after an hour we started the journey back and hit a bump and to my surprise, the belt realigns itself

. and we reached home. (you think the story is over?)

Reached home and made a call the next day to get is checked what happened so I booked a service call for Monday morning around 9.

No-one came at 9 so I got confused as they would usually come at the same time and once again called Ather to confirm the appointment they said they would definitely call and come, so around 12pm the person came and picked up the scooter and I specifically told them what happened. (wait he even noted everything down)

The entire day went off, no one called me and gave me the status of what they found. so the next day I called them to get the status CC told me they would arrange a callback. So the service engineer called and told me the Scooter is ready after service (wait what???) I asked him was he able to find the problem, he said what exactly was the issue, So I told him everything and he was like wait this scooter came for service or complain repair? so after hearing he told me he would check the left side of the scooter and will call again.

At 5 he called again and said he could not trace the problem and scooter as completed all inspections and is ready for delivery Hopeless me because the problem came and went away (just like a Ghost), No one will believe me that it might have happened.

I would say the Belt from the motor to the pulley might have slipped not the pulley to the rear wheel but hey I really don’t know which one was at fault.

If anyone has faced the same problem do enlighten the community

Almost certainly not the belt. Cogged belts don’t slip. They snap. They certainly don’t magically fix themselves after a failure.

Wrong, All belts do slip, they can slip teeth, a few times depending on the tension in between them, incase of Ather they do fix them self up because of the placement of pulley to rear wheel as the Mono suspension plays the role of tensioner , That is why we see the belt on a different position on the rear wheel gear after every ride

So the belt lost tension, slipped, regained tension and seated itself back perfectly again? Okay.

Ather they do fix them self up because of the placement of pulley to rear wheel as the Mono suspension plays the role of tensioner ,

How ? They can fix themself if it’s malaligned. Not slipped

I think that’s what ather meant

My analysis was that is had slipped not way over the point of non-recovery, but was grinding with something that was shaking the entire scooter, even when dragging

During the problem , Pickup is dropped ? R u feel any jerk while riding ? 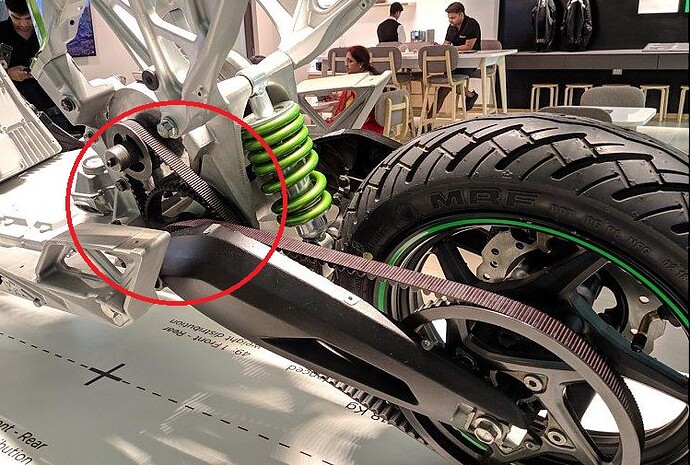 If it slipped, it couldn’t possibly fix itself up.

I got a call from the Ather service team. They have mention it that they are running simulations on whether the belt on the secondary can Misalign to a certain level which can cause rattling and the entire scooter starts to vibrate or not. They have mentioned to me that the primary belt cannot slip since the axial in between the pulley and motor are fixed there is no possibility of misaligning or slippage, it can break though, but cannot slip.

So I have been told the slippage is an improbability and I should not be fearing for the belt to slip out. They will conduct further research and tests of possibilities.

It’s a relief that Ather does take consumer feedback from this Forum.