DarthVeda's return to the light side

Few things changed in my life around end of last year and I was going to shift my house from Jayanagar to Chandra Layout and my office commute was going to double from 24km to 55km each day, I was like no way I can do this every day in traffic of Bellanduru and ORR, and in my Pulsar 220, decided to go for an EV and seeing that Ather 450 being the only sane choice (here’s me looking at you Tork and UltraViolette)

I booked my scooter and informed my friend who had bought it earlier, he told me that he has another booking opened, and just needs to complete the payment and that I could have that slot if i wanted to. few days passed and I decided to go for it. I paid for his slot, and so began the ride of weekly updates which then turned into daily updates, finally the day came, my friend called me and said, let’s go pick up the scooter, I will come in mine and we both will ride back on each other’s. He was coming from Kumbalagodu, i was pondering whether he will be able to complete that journey from there to Ecospace and then to Indiranagar. Turns out, he is not coming in scooter but asked one of his workers to come to Ather space directly, he picked me up in his Innova and we went off to Ather experience center.

the process went off in a breeze, it took around 10 minutes for them to ask for signature and OTP for subsidy, he received the prized “chocolate” box and it was all done. The other scooter hadn’t arrived, and that guy was on his way near KR Market flyover, so we decided to leave from Indiranagar and head towards central Bengaluru to meet and swap the scooter. This was my “first” time riding an electric vehicle and as it is for everyone, I started the scooter and waited for the sound, then realized like an idiot, there wouldn’t be!

, started riding in ECO mode, as I was worried about the range and after hitting Kasturba road, I was like screw this mode and went to Ride mode

We met my friend’s team member at Hudson circle, swapped the bike and then immediately realized the difference of a new scooter to an old one (relatively put), it wasn’t much, just that accelerator felt a bit tight and not smooth as the new one was.

I rode the scooter to my house and had plenty of charge, since It was my friend’s order, there was no DOT charger installed at my house, so we had ordered the Portable charger for my charging needs. Plugged in the charger and thus began my cycle of EV ownership.

My first commute to office, and I was already riding in “Sport” mode and didn’t bother carrying the portable charger. And I soon realized the benefit of EV when I hit peak traffic on Agara flyover, just stop and no need to worry about fuel being wasted, holding clutch, and struggling. It was just pure bliss riding on this EV, and it wasn’t long before people started asking me about the scooter and the cost, even the Vayu Vajra bus driver

Rode to office, and our office security have this weird fascination of checking storage space of scooters, and I see every activa rider, getting down and removing the key and opening it for inspection, though god knows what they inspect! And for me this was a breeze, just get up, turn the key around and be done with it, even before the security guy closes the lid, I would have switched on the motor and be ready to roll, that’s another +1 for this scooter that I hadn’t anticipated.

Fast forward 2 months, and I have been enjoying the rides each day and only using my pulsar every fortnight, I can see a change in the ride from the EV to pulsar, the obvious being the power on the pulsar but I do miss the silent acceleration of Ather. Soon, the time for delivery of “my own” Ather arrived. My friend paid for my scooter, I choose not to go for Ather installation of DOT charger, as I was unsure at that time, where I would want it installed. I stay in a rented place now, and didn’t want to drill additional holes at the owner’s place, and my in-law’s place was two roads across, and could have had it installed, but then I would be leeching their electricity, so was left in an conundrum. A week later, the DOT charger arrived in a nice big package, and seeing that it is nothing but the portable charger in a bigger package, I decided to do a temporary installation at my home itself. I called my father’s friend to help me with the installation, he suggested that instead of my original thought of hanging it on the window grill, that we put it on a wooden board and then hang that on the window grill, few hours later, the DOT charger was ready. As expected, the DOT charger didn’t accept my friend’s scooter and I knew I had to raise a ticket to get this authorised, I did so immediately. Few days passed by but still nothing, then I understood the laborious process of adding another scooter employed by Ather. They need authorisation from both DOT owner and Scooter owner to have this additional pairing, for what joy they need it I have no idea! After 4 days, the authorisation was done and I no longer needed to hook the portable charger through window pane and charge it, the charger was easy on the DOT charger. 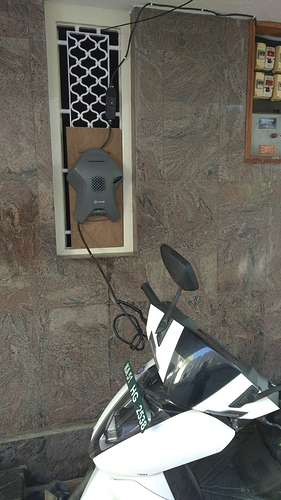 Finally, the date of delivery came and I was told to collect the scooter on Friday, I asked for the delivery to be scheduled on Saturday so that I can come with my friends and take the scooter back home, another friend would borrow it for few days. The change was confirmed through customer support, and I rode to the ather space while my friend came in Metro. As soon as I entered the experience center, I realized something was missing, my scooter!! The representative told me that it isn’t here, and my scooter isn’t scheduled for delivery today but was two days back! Ah the miscommunication between teams exists everywhere

Few calls later, they informed that my scooter is in their go-down in NS palya and it is being scheduled for pick up and will take few hours. Since it is Indiranagar, and there is no shortage of place to spend those few hours, we decided to go to the nearest watering hole. Few hours later, we went and checked in the experience center and I could see my scooter getting ready for delivery. While the first scooter delivery took few minutes and was a breeze, this took hours and it was anything but. My friend couldn’t wait for so long that he took my scooter and went home, after an hour, I got the delivery and skipped the usual tutorial, and scooted out of the place. After a while, I realized that I missed taking something… the Ather Souvenir Chocolate box

I reached home and the ride was smooth, the accelerator was super smooth, and I noticed few improvements over the previous one, the scooter now sounded alarm when reversing! Other than that, not much of difference between this new scooter and the previous one. Time had come for me to return the previous scooter as it had 5k on the ODO. I scheduled for service for it and dropped it personally since it’s quite near my Jayanagar home, I told them of the few niggles I had and left. I got a call by late evening that it is ready for pick up and whether I would like it to be dropped, I declined and said will pick up for myself. Upon arrival, I was told the changes done and few things replaced, which was a surprise to me! I had forgotten to inform team that one of the plastic panel covering the motor fan had fallen off, and to my surprise that was replaced as well. I asked how much I had to pay and to my surprise it was ZERO! Everything was covering in the ather plan. I rode back home with a big smile; the accelerator was now super smooth.

I have been using the scooter for over few months now and I have no complains the range is good enough for my office commute, the cost is minimal, I spend around 300 rupees on electricity charger where as it used to be around 3k for fuel costs before. The only trips for fuel station have been for air

Then came the lock down, and now I have shut down my scooter and I don’t have to worry about starting it every now and then fearing battery discharge. So there’s that.

Things that aren’t so good: