Creating a new topic since it is another milestone on my Ather 450(wheeeeee)!!

It has been less than a year since I got the delivery of this amazing machine which goes wheeee on Feb 24th, 2019.

The journey with it has been brilliant except few minor hiccups which I will talk about in this review.

First of all kudos to the entire team at Ather for launching this pure EV scooter built from scratch and bringing a Tesla level EV (although this is a 2 wheeler) and charging infrastructure to India!

Below is the screenshot from one of my many rides, few people have asked for these detailed stats as well for my tweet about 10K Kms on Twitter.

And haven’t done one of those slow rides patiently to see how much maximum range I get, if I do one in the future I will post about it.

Requests to the Ather team to consider in upcoming models:

Awesome Sir. Gives me confidence as I await the delivery of mine. Whats your charging pattern? Do you go all the way to 100% or restrict yourself to 80%? A tip from a seasoned rider like you will help all.

My daily commute is 35+35kms during weekdays. And I mostly ride in the sports mode itself and I don’t have to worry about charging because my workplace has provided the facility to charge.

So, I charge it to 100% from around 40%. Since I immediately use the scooter after full charge, as per the little knowledge I have about Li-ion batteries, it should be fine as am not leaving it at full charge for days together.

Also, I believe Ather has made it in such a way that there is idle discharge if you don’t shut down the scooter completely, this I believe is again to protect the life of the battery.

HI BRO,This is yeshwant from bangalore, please help me get a good range coz i am getting 50km in ride mode and 45kms in sport mode i took the vehicle last week…please bro waiting for u r reply if poosible please share u r contact detail

Hey, it’s actually pretty easy, modulate the throttle wisely, don’t keep the throttle fully open in any mode, light inputs up to 40-50 kmph and maintain that speed with very mild throttle inputs. If you see traffic ahead, or a signal or slower moving traffic let go of the throttle, coast, you won’t lose much speed because of the very mild regen and brake as required. That should do the trick. Keep in mind not to go berserk with the throttle in any mode of you want more range.

You’ll have to ask CS then. I’m not too sure. 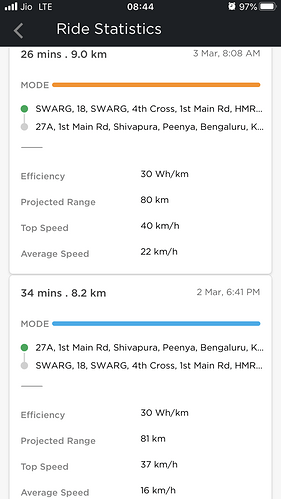 The dot will not “cut-off” power, rather it will switch to a low power mode once battery reaches 100% SoC. This is normal and not something you need to worry about.

It does cut off at some point, I have seen “Charged” on the app and it stops charging and it again charges when the voltage drops since battery is being used even at idle state of the vehicle

Correct! This is what every known charger does. It is called trickle charge and helps top up the loss to maintain 100%

Yup, this is happening to me right now as I’m typing. It said charging done two minutes ago and now it says charging at 100%. I assume it’s trying to keep it at 100% and avoid discharge.