Blame it on Warp mode

I was expecting test rides to start in Hyderabad from the weekend of 17th October considering the payment window and delivery timelines.

@abhishek.balaji called and surprised me three days before that by offering exclusive warp mode trials for the whole weekend including Friday. There were no bounds for my excitement and joy, it was like a dream. Immediately I’ve reached out to our society for the permission to charge the scooter using the plug point in the common area, they were understanding and responded positively. I’ve already approached them earlier for charger installation and got approval. Could not sleep well on Wednesday and especially Thursday

Got a call from Arjun Pradeep (Hyd city manager) on Thursday, he gave me coordinates to collect the scooter. To my surprise it was the same dealership where I get my car serviced. On Friday, I wore Jeans for first time after March 23rd (it fit me as I was bicycling regularly and was in shape for it at least) and came out of 4KM radius of my home first time after lockdown. Reached there by 11:30 AM, waited in lounge and the ambience was familiar to me. Soon Mr. Ashish (Hyd Ather team) joined me, we spoke about dealership, where the showroom is coming up etc. He took me to the basement and showed me the scooters… they were stunning, all three colors were available and fortunately he did not give me choice, I’d have stayed there till next day choosing one. Green one was fully charged and up to date, grey one was getting OTA and white one was being charged. I was given green scooter and Mr. Ashish explained me the features, showed me charger, how to open boot etc., and asked me to get familiarize with it by riding it in basement. He offered me a helmet as I don’t have one (I don’t own a scooter/bike yet). We came back upstairs did some documentation. He is also excited to be associated with Ather, as it is a new experience for him too, he has fair amount of experience dealing with ICE cars. He was interested to know how I knew about Ather and what made me to consider Ather.

I took off with the scooter and was driving in warp mode. The balance, pickup and ride quality was fantastic. Soon there was a traffic signal, other commuters at traffic signal started staring at the scooter, there was no branding on it except under the tail lamp, since it was still new for me, I did not throttle much and drove normally when signal turned green. I noticed some heavy sound from underneath when I drive through speed bumps, thought if battery was not fixed properly and it is moving, then I realized there’s a charger in the boot space (there was a strap in boot to tie the charger or our belongings from moving, found it after reaching home). After driving for about 3KM, there was another signal and I got the same stares at this signal too. I was confident at this point to show the crowd how super the scooter was, once the signal was green, I throttled it enough that I flew away and within 2 seconds everyone was at least 200 meters behind me, they could not even catchup with me. All the way I was just enjoying the ride and making others on road wonder what the scooter was. At one point a Royal Enfield guy honked at me to give him way and tried to overtake me. I took it personally, there was a left turn we both had to slow down and as soon as we turned left, I just throttled and by the time other guy was still changing gears I was half a kilometer away from him. After reaching home, even though there was 70% charging left, I wanted to test how charging works. I was worried looking at the buttons on charger plug. I tried by fixing the plug in 16A socket and charging pins (don’t know what it is called) to scooter and switched on the power, yay scooter started charging. The charging process is as simple as charging mobile phone, I was relieved. 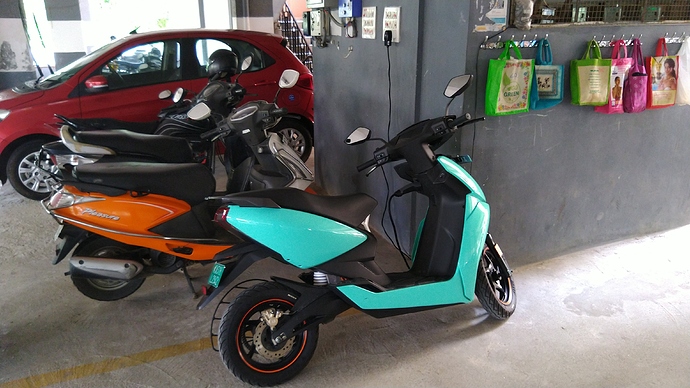 I left the scooter in parking for the rest of the day. I came back downstairs at 8PM to collect a package, at the same time one of our neighbor returned from his office, as soon as he got down of his scooter, he ran towards 450X and was just going around it like a satellite revolving around the planet. The lack of branding on these trial models made everyone wonder what the scooter was and I had to spell (ATHER) every time when I tell anyone. My mom liked the scooter so much that she gave me our washing machine’s cover to cover the scooter, I did not cover it though.

Then came Saturday, I woke up early in the morning, took the 450X to the streets. I generally don’t take photos, but for this I took some photos with my mobile. One of my friends was to bring a camera, but you know people are lazy to wake up in the morning especially on weekends. 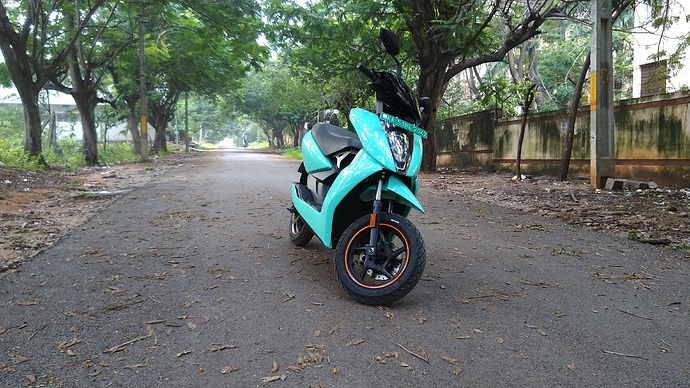 Later, I took it to rocky off-road trial, the 450X handled so well both during uphill and downhill. The tires did not lose traction and offered perfect grip and stability and to mention there were heavy rains in Hyd over the week (my bicycle gets slippery during downhill on the same track). Scooter is just rock solid. Both scooter and I managed to come out to the rocks scratch less. 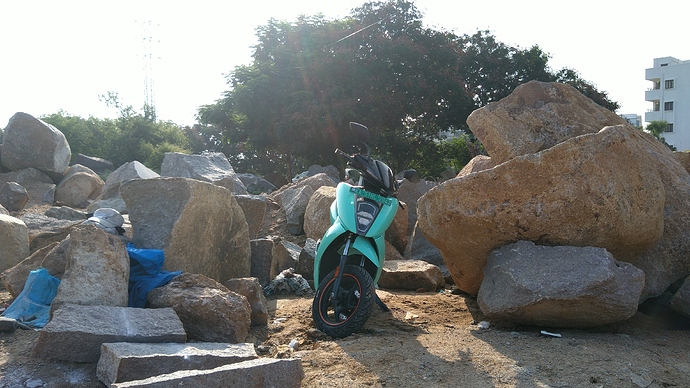 Rest of day just passed by with unlimited joy rides to my kid. During the evening took my wife for a ride, she said the scooter is sounding like an ambulance, but she liked the ride quality as there are no vibrations and rear panels of the scooter are not bulgy unlike other scooters and the reach to footrest was easy. I need to mention that our parking ramp is steep enough, I see tire screeches on the ramp every day due to loss of traction. I comfortably drove up the ramp along with my wife and kid on the scooter. Gave demo to few of our apartment residents in the day, again to my surprise they were good with fixed battery and according to them carrying battery to home for charging is not practical.

I woke up early on Sunday too and took the scooter for a spin to the market. The park assist is blessing, we can park the scooter in any direction and can easily comeback even if there is speed bump obstructing. My kid got unlimited joy rides on Sunday too. In the evening I started from home to return the scooter, I didn’t want to but don’t have a choice. Same story at the traffic signals, everyone starts staring and when signal is green, I just flew. On the way back thought of visiting the future Ather experience center, but to my disappointment no visible works have not begun yet. It’ll take more than a month to be completed. I was reluctant to return the scooter, then I thought why not visit the newly constructed hanging bridge. I drove through it admiring the scooters performance. Suddenly I saw a sign for speed limit as 40kmph, but since I had to drive only in warp mode and was forbidden to use eco or ride mode, I couldn’t slow down and consoled myself by saying “blame it on WARP mode”. Please don’t direct the over speeding tickets to me if you get one during my ride. During my detour, rain started pouring and wow I was able to test the scooter in rains too. I did not loose any traction on wet roads, handling remained good. I reached the dealership soon. By spotting me across the road, few of the dealership employees started staring at me/scooter and as soon as I jumped into basement one of the employees came running to basement to have a look at the vehicle. She liked it very much, I was privileged to get the scooter even before their employees could see them. The ramp to the basement was very steep and was slippery. I could drive on it without any problem. Later, they were taking a SUV out of parking for a test ride and it lost traction while climbing up. On the corner of the basement in the dark I saw someone. I just ran to the corner… wow it was Series 1, absolutely loved it, took some photos of it. It did not come with translucent panels though. I could smell the paint from a distance, it came directly from paint shop. Since it was raining and Hyderabad was already flooded, I did not stay there long and returned home. 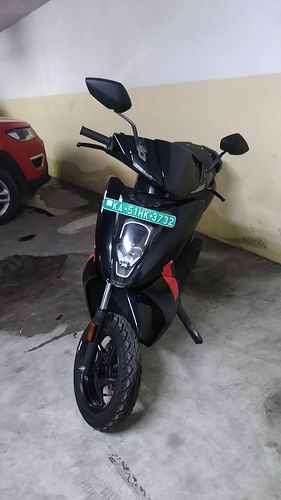 Overall, it was more than satisfying experience. I knew that I did not contribute much to the Ather Community/forum. But still Abhishek and team considered me for early warp trial as I was one of the earliest community members from Hyderabad. I’ll remember this experience for rest of my life.

Now the biggest dilemma of my life, should I go with Series1 or green!!!

Another lucky guy from Hyderabad

I am also in the same dilemma now. Apparently I was told the production of green variant is yet to begin.

was told the production of green variant is yet to begin.

True. The above photos are not of a production scooter.

Got my S1 delivered on Monday(30th Nov 2020), I’ve completed 100 KM’s on ODO today. Here is my initial impressions on Trail vs Production model

Got more enquires on road while riding S1 than the earlier Green scooter.

I’ve driven mostly in Sports mode and got 80+ KM’s range. Did not use the dashboard yet except for reading the Odo and Speedo and park assist.

Will write a detailed review once I complete 1K on ODO.

The experience with dealership is good so far, visited the dealership only on delivery day and process was completed within an hour, DOT was activated on the same day of delivery.

My thanks to Ather and dealership for absorbing the road tax for initial deliveries.

What was your order number? Like in Hyderabad I mean out of 600. Just to know the status of deliveries

Any tips to get vehicle quickly? Btw you got road tax waiver?

Road tax waiver G.O is not yet passed by TS Government, Ather and Pride paid Road tax for first 15 to 20 customers. If you are willing to pay upfront, just reach out to the dealer directly… they are responsive and are clearing the stock as soon as they receive. In case you opt for Grey color, they might even deliver it to you on same day.

My advise for people living in apartments: get the approval for the DOT installations at the earliest. People want to say no in all possible ways even at the last minute while installation. One guy asked me if the Electricity meter will be able to handle the load of charging

Nizampet to Charminar to Nizampet

Round trip of 45 Kilometres done with 48% Battery remaining in peak city traffic conditions, drove only in Sports mode

Any ICE scooter would have costed Rs.100/- for petrol