August 2020 marks the second anniversary of The Forum and my first anniversary as the moderator of it. I’d like to congratulate all you folks because a community like this is like a pack of wolves; as they say… “For the strength of the pack is the wolf , and the strength of the wolf is the pack”. Each member is responsible for what the forum is today. And yes, I did watch jungle book many times during the lockdown

I woke up to a bad dream. A dream that I can’t put in words. They say a picture speaks a thousand words, I’ve recreated the dream for you in this video. 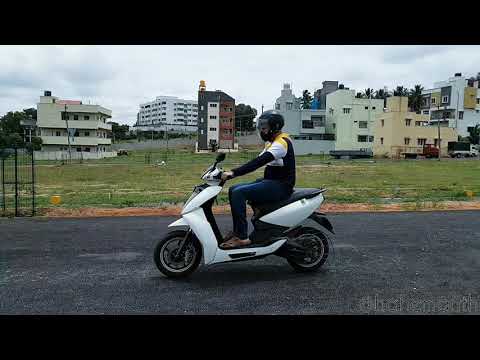 All these days when I twisted the throttle of my Ather 450 and overtake that Aprilia on the road, I used to feel that this is the fastest scooter in town (as a matter of fact, it was). Now my scooter feels slow…it’s like I can’t catch some black thing that started with me together from that signal lamp and just took off! It’s like someone has cast a spell of BLACK MAGIC on my scooter!

Couple of days ago

Abhishek, Sourabh, Gandharv and Nilay used to be in contact with us moderators during the lockdown via video calls. They used to give us a week’s time and setup a meeting at a time suitable for all. But this time, Abhishek just a dropped a message on Thursday evening that all moderators have to come to their office at IBC on Saturday noon. On Ganesha festival of all days! I said it would be not possible on a festival day and that too lunch time! But he called me again and insisted that I make it and he said “it’ll be worth it”. It was rescheduled a little earlier so that we could return home for lunch! Unfortunately and understandably @rajeshkav couldn’t make it.

On Saturday, I reached the IBC at 10AM. the precautionary measures were as though I’m entering a secret vault of FBI or something. Everyone were wearing Gloves, masks, face shields, thermal scanning! Thankfully we weren’t given full body PPEs. Sourabh welcomed us and took us into a meeting room where a 450X was standing (the mint colour). Later he along with Shiva were having a casual chat with all of us about the pandemic, the details of the 450 and other things in general. They didn’t tell us what was really the agenda and kept on building the suspense. Ravneet came in a few minutes later and we had a chat about how to take the Forum ahead, what are the plans for the next cities SOASF.

“Ok, let’s take them outside” said Ravneet and we walked along the aisles to their parking lot. Two Blacks and a Mint were standing there. They told that this is the 450x but…without the android dashboard. It was basically a 450 but with the battery pack and the motor of a 450X. It’s a pre-production version and we could only test the warp mode and nothing else.

“Fine, let’s start”, we said. Raghav took the mint and Anagh and I got the blacks. One by one we were told to ride in the warp mode in the parking lot. It was a 200mtr dash up and down. My turn came…I turned that throttle, the scooter said Wheeeee and I said Whoooaaa. Took 3 laps and it was just insane! the vehicle pulled me like crazy. Then one of us took a 450 for a comparison. Frankly there is no comparison, the 450x in warp mode is just too much for the 450 in sports mode! we swapped the vehicles but irespective of the rider, the 450 just can’t catch the 450X. After multiple rounds, we had to sadly stop.

Obviously, I had two questions. Was the normal 450 given to us purposely slowed down to make the 450x appear faster? Isn’t this too short a ride to feel the scooter? the second question was answered when Sourabh told that you’ll get to keep this 450X for a couple of days. They told they’ll deliver our scooter home while I could ride back in the black beauty! Those 2 days would give me time to find answers for my first question. After some formalities and some points to remember, we were ready to go. I was expecting to see the collector’s edition but it wasn’t to be, but it was still worth it! Anyway once I was out, I reached home earlier than I had expected!

After lunch I called another friend who also owns an Ather and we went to make a more comprehensive comparison and photo shoot. 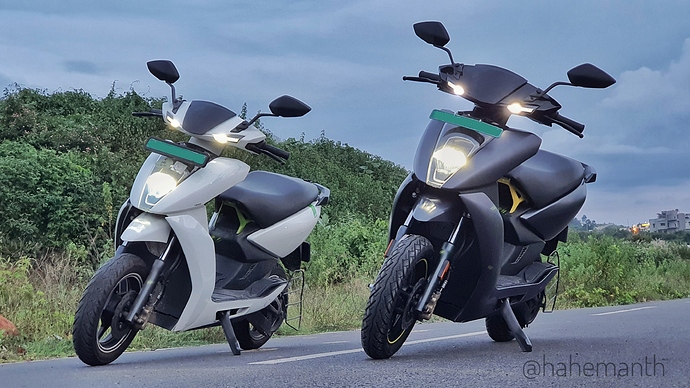 First up…Was the 450 given to us intentionally made slower to make the 450x appear faster? answer is in the below video. For the records, the latest 4.2.2 OTA has still not reached me 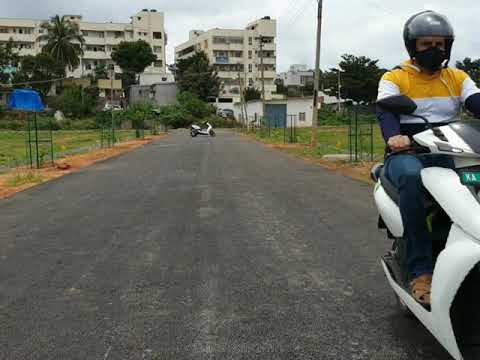 From the spec sheet, the 0-40kmph for the 450 is 3.9s and 3.3s for the 450X. The difference of 0.6s may seem small but on road the difference is considerably more. The ease with which it takes off is just something that you’ve to experience. the 450 itself is amazing at that, 450X is another level. 450X is like the 450 went to a gym, put in all the hard yards and transformed itself to a stronger, sexier individual. It looks the same but it isn’t the same. There is an X factor now!

The whine of the 450 that we are used to seemed to have changed a wee bit but can’t say if it’ll be the same in all production version 450Xs or only in this. But it still has that signature Wheeee that I love. 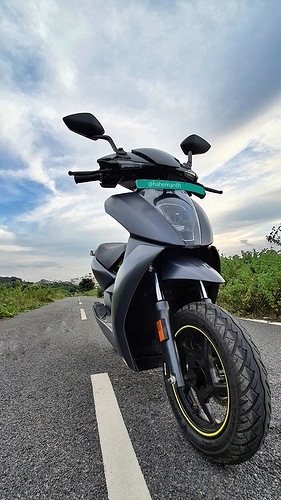 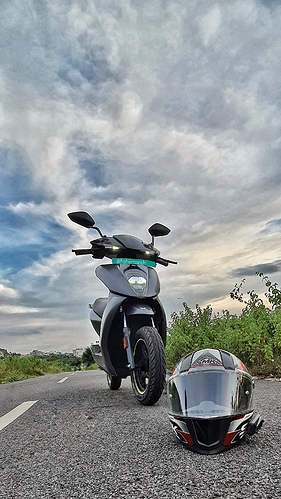 That was pretty much it. Being a beta scooter, the dashboard was same as 450. We couldn’t connect to a mobile app either (which I sorely missed) to check the numbers. It would’ve been good if we could see some more numbers. the charging time seems similar to the new 450 but I couldn’t track it properly. The portable charger I got seemed to have some loose connection and it had stopped charging at 83% overnight. In the morning I checked and a slight movement of the cable and I could charge it. Once I found the perfect position for the cable, it was charging properly from then onwards.

My weekend was pretty simple, charge-warp-charge-warp-charge! I took it in and out of my apartment so many times that the security staff who had seen my 450 also asked me what’s special about this one. They said it is better looking than my Ather and I have to agree with them! It is Dark, Handsome and Nocturnal. I’ll not be doing justice if I don’t have dark shots of this scooter. So here you go… 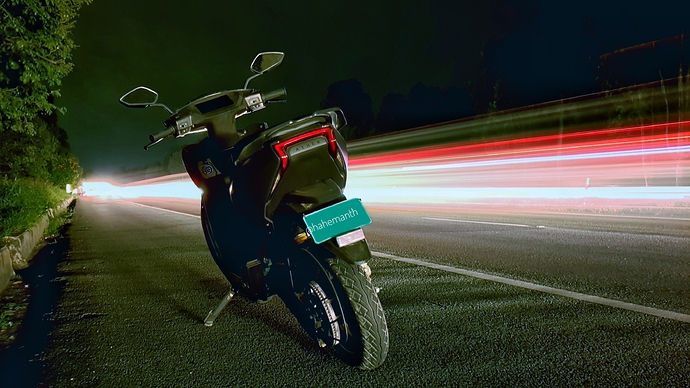 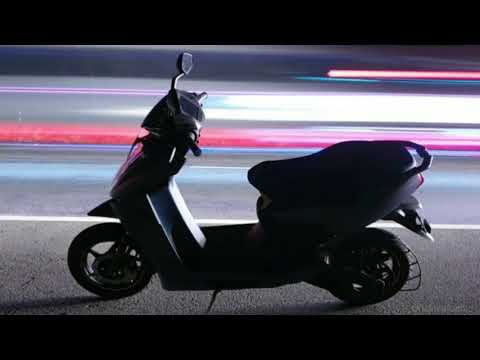 We’re told that the test rides will open for all… as @abhishek.balaji says… Soon!

Signing off with a parting shot of the BLACK MAGIC 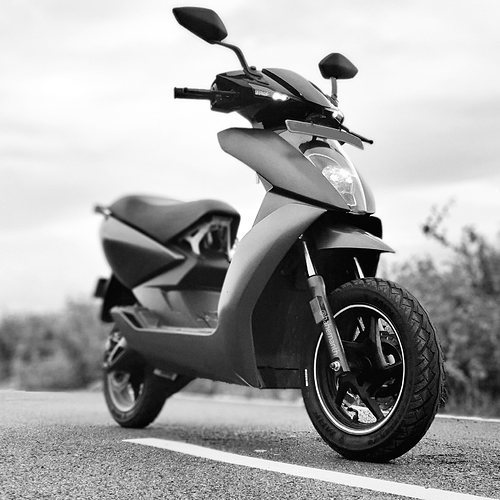 So here you go…

It might just be a colour change design wise, but leave it to you to make it look even better in these photos. Also sir will you be upgrading?

Even for some one like me who did not utilise the 450 Sports mode itself fully, this looks tempting…

It is like I don’t use my Snapdragon 835 phone to full use but drooling about the phone with 865+ ad.

Really cool photos! Any updates to the seat design or rear view mirrors?

@hemanth.anand Wonderful and Streaky Photography of the Black Beast! Wish I would get my hands on it sooner!

The seat height has been increased to 780 mm in 450X. Seat design and rear view mirror design remains same as 450.

Is this a result in tinkering with the suspension or is it because of any major changes in the frame?

It might just be a colour change design wise, but leave it to you to make it look even better in these photos. Also sir will you be upgrading?

Thanks Suraj, Taking a test ride and reviewing vs owning one has lots of things between them

Really cool photos! Any updates to the seat design or rear view mirrors?

Honestly I didn’t find any change. Moreover, the scooter that we test rode was physically a 450 but with the battery and motor changed. So I really can’t comment. Even otherwise, I don’t think there will be any change with the mirrors. In fact I’m ok with the mirrors, I need a less leaning side stand and brake lever lock!

Your optimism might inspire Ather do it much faster

Is there any difference in ride characteristics/speed in ride and eco modes between 450 vs x?

Being a beta firmware, we were told that there could be bugs and hence it was recommended not to shift out of Warp mode. We were also told that below 35% battery, it would shift to ride mode. The scooter that I’d got, went below 35% once and switched to Ride mode. So I did ride it in Ride mode. It’s the same as the ride mode in 450. However it felt more boring after all the warp mode sprints. 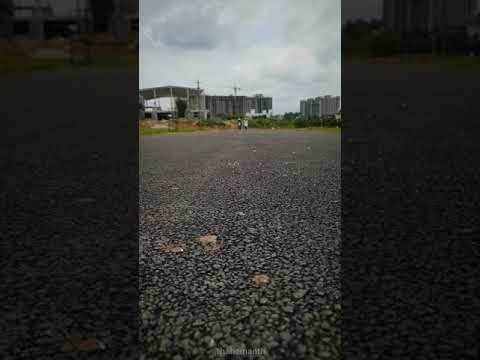 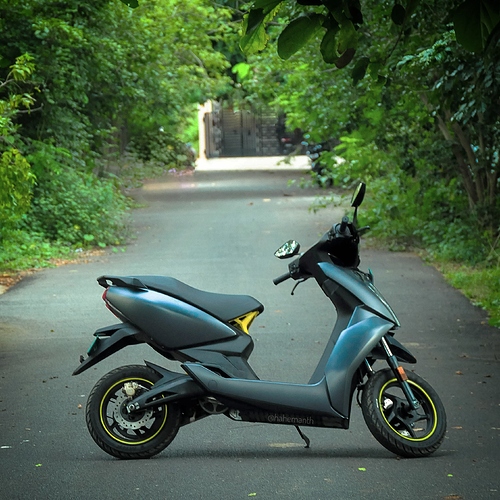 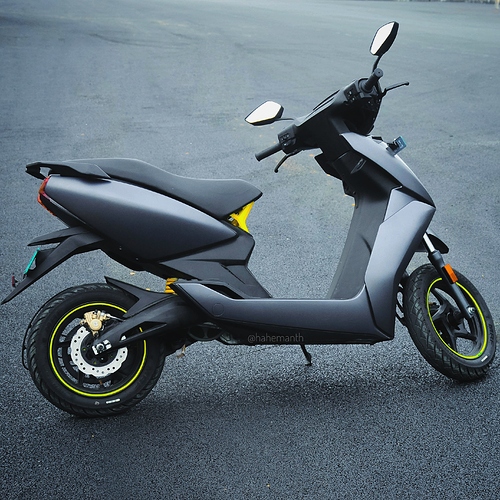 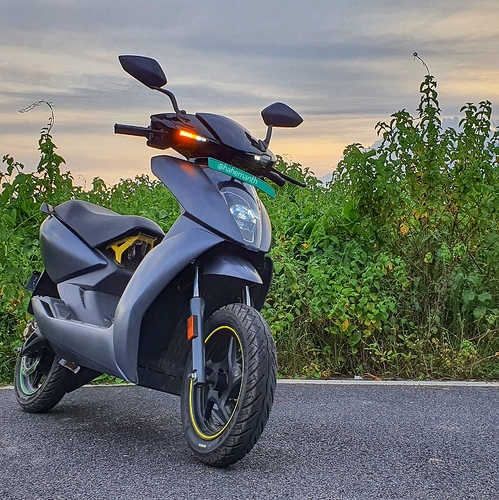 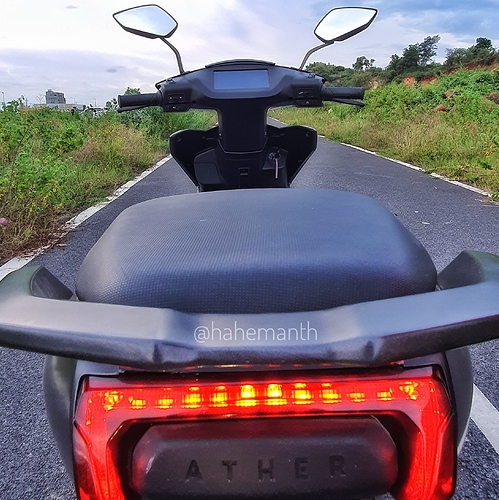 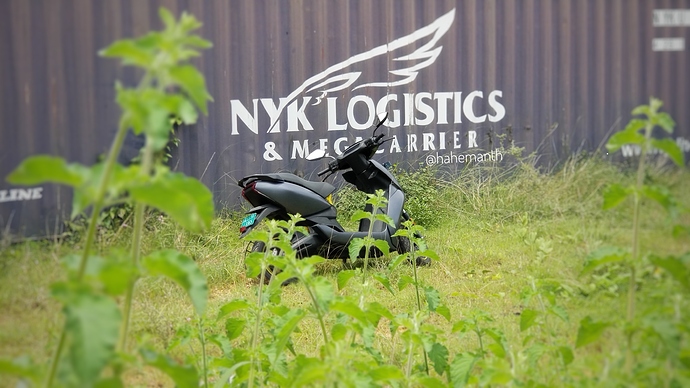 Actually I still like White colour. The only time I thought of different color was when I learned that 3M protection will turn yellow soon…