Late Post. Also, FYI this is my first post other than replies to threads in the forum.

Ather Kochi Showroom celebrated it’s 1 Year Anniversary on 12th March 2022 and invited owners to participate in a small ride. This is the blog for my journey. I haven’t ridden the Ather this long in a single day.

I stay around 30km away from the EC. I started my journey on 9AM with 98% charge and 83km indicated range. Adding the photo taken. 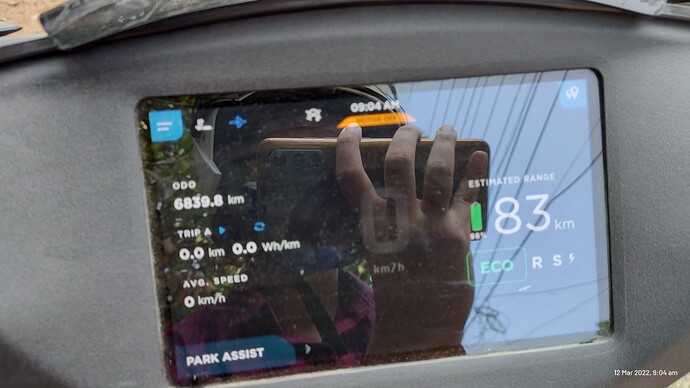 I am a very leisure rider, and the ride to EC is mainly through highways.

Just after starting ride, I checked the tyre pressure at a petrol pump on the way. 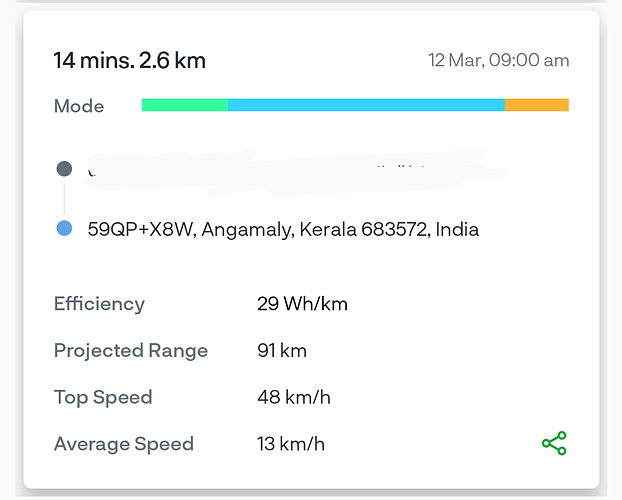 On the way I had to go to Rajaji Road, near KSRTC Ernakulam bus station. Reached there by 10.33am. The ride was 31km long (from home) and mainly used sports mode since it is highway and maintained near 50kmph speed and overtaking not so often.

Remaining charge was 70% with 42km in Sports mode as the estimated range. 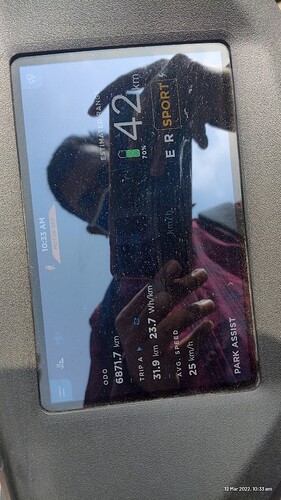 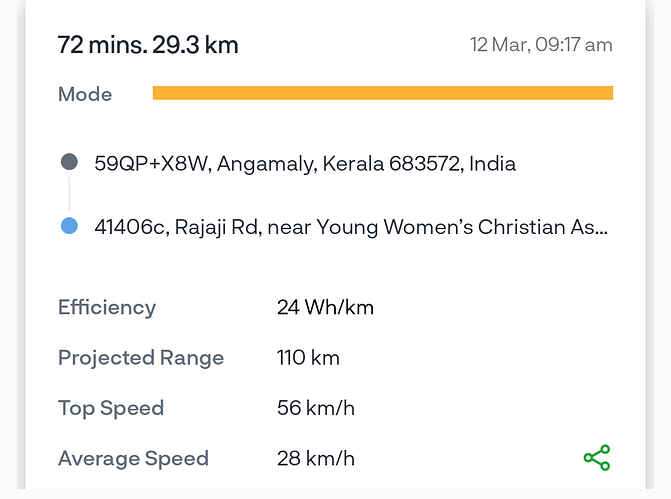 After the work there, started to EC from Rajaji road which is around 6km away. Reached EC at 11am with 65% Charge and 44km estimated range in ride mode. 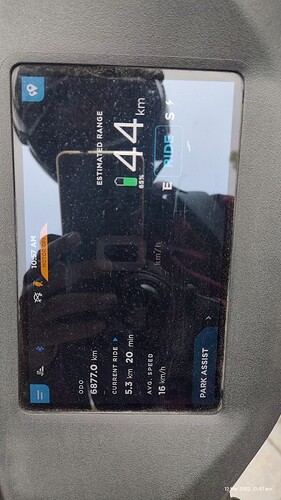 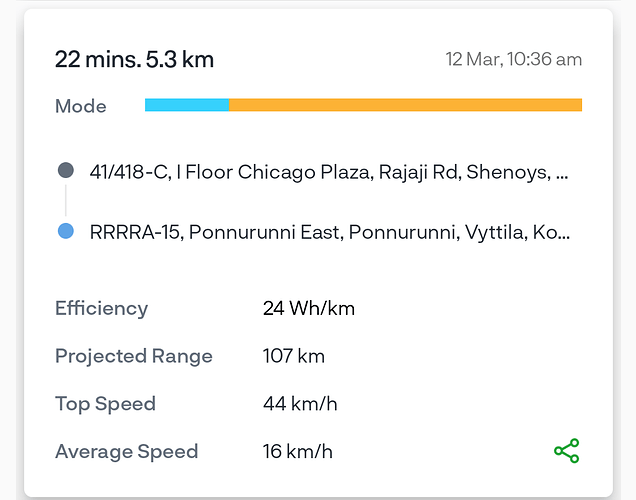 The program started at the showroom. And there was talks from Ather executives in Kerala and also Kochi EC showroom staff. Some owners gave feedbacks and talks about Ather. Many fellow Ather owners reached the EC. 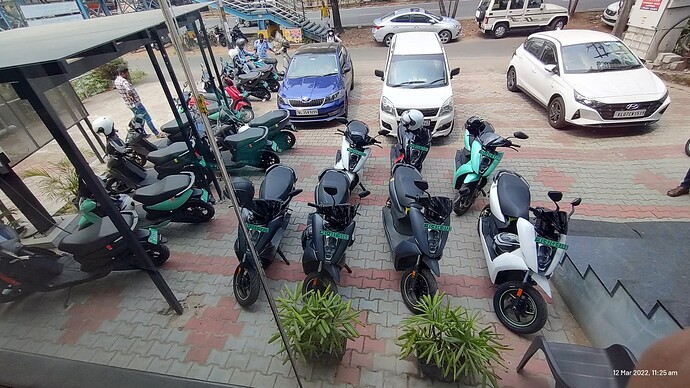 We started ride at 12.20PM to go around kochi Marine Drive. 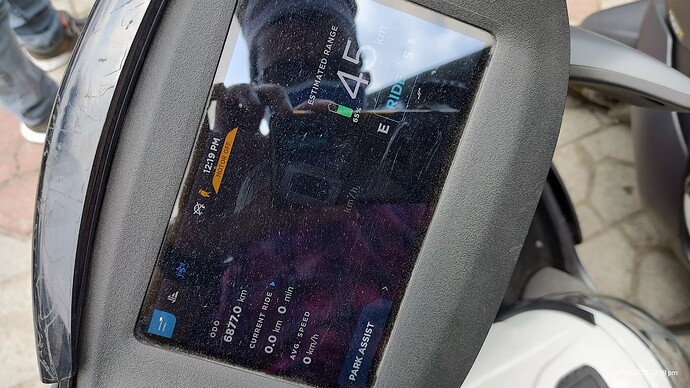 It was a very relaxed ride with many Ather riders as a convoy. The traffic was high but fun to ride along together. As shown below, the ride stats. 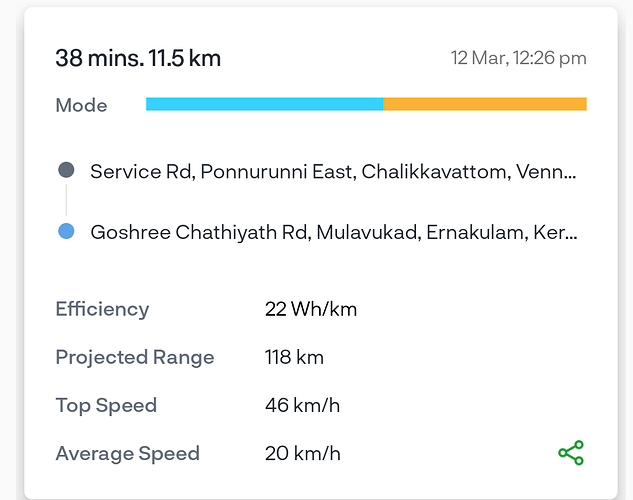 There were few photo sessions at I❤️ Kochi and also near Marina One Apartments. 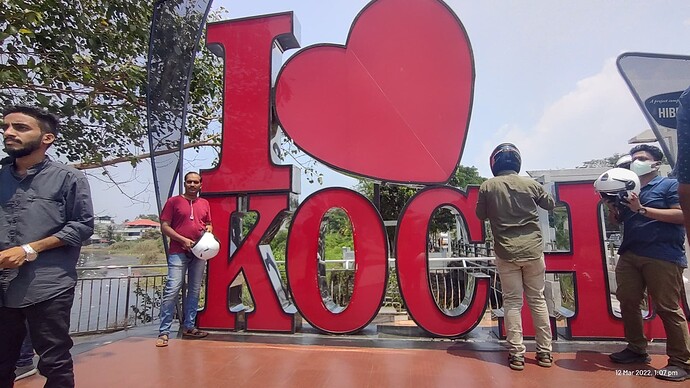 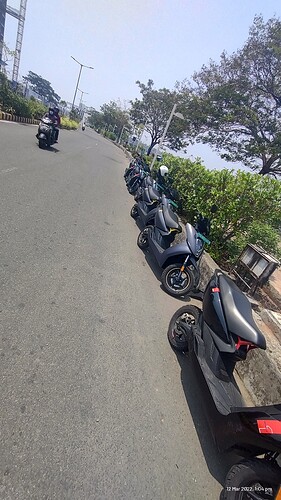 It was a sight to see so many Ather together.

After the photo sessions, we proceeded on to “The Salt” Restaurant near Marina Mall, Thoppumpady.

The ride was along the goashree bridges windy because they’re next to the Kochi backwaters. Reached there by 1.45pm with 44% charge remaining. 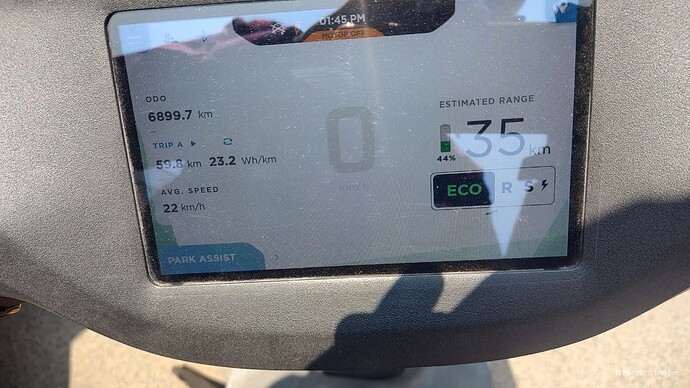 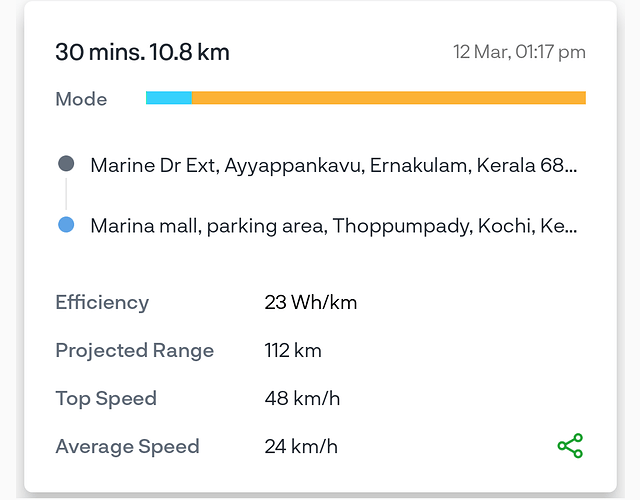 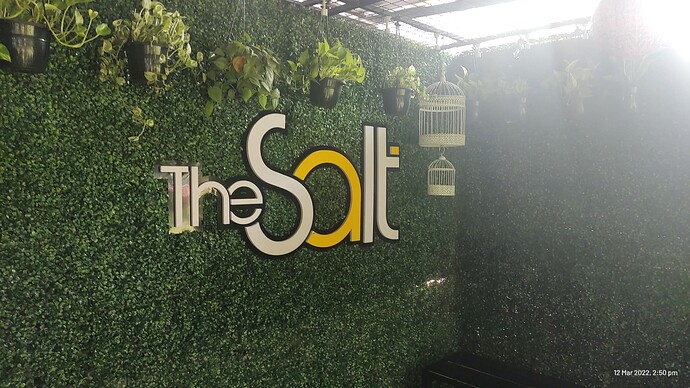 Ather team had arranged lunch for the fellow riders here. Also had a group photo here (didn’t get it to post here) The riders disbursed to their homes from here. My Ather 450x had 35km range left in eco mode but home was 43km away. Decided to Charge my scooter at the grid to make it to home safely. Started the ride to Grid by 2.55pm 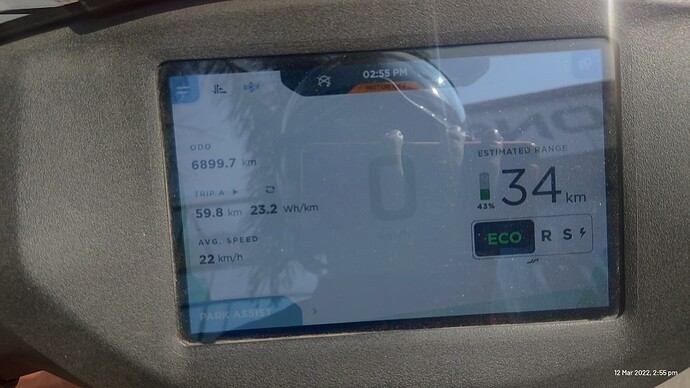 My first choice was Jogo Infinite , Perumanoor. But once I reached there, another owner was charging who also joined in the lunch. Proceeded onto French Toast Panampilly Nagar to get the grid there. 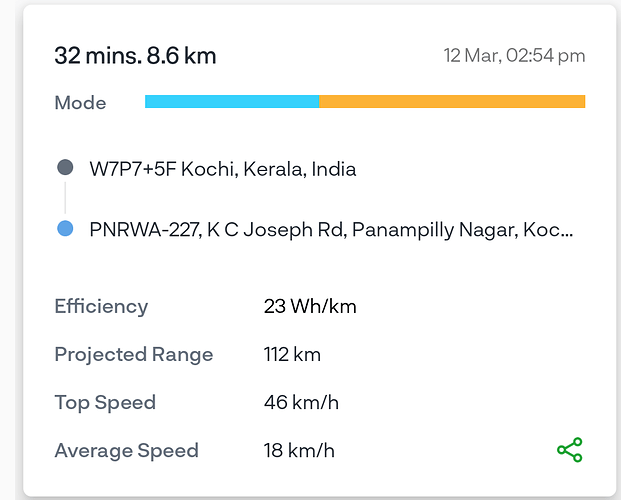 Although the charger was already occupied, decided to wait there for the Ather to finish charging. Had joined with another rider who also had to charge although he only needed to charge for 15 mins since his home was near. 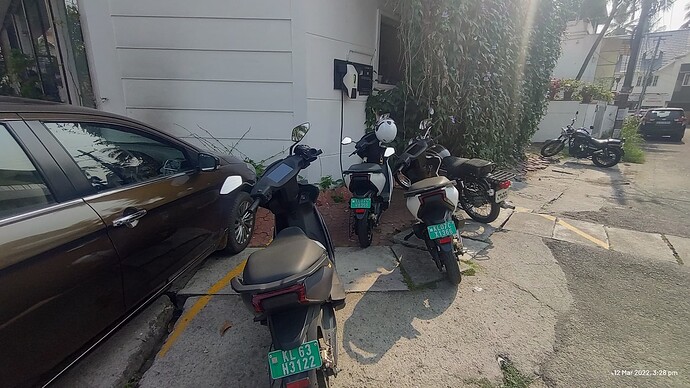 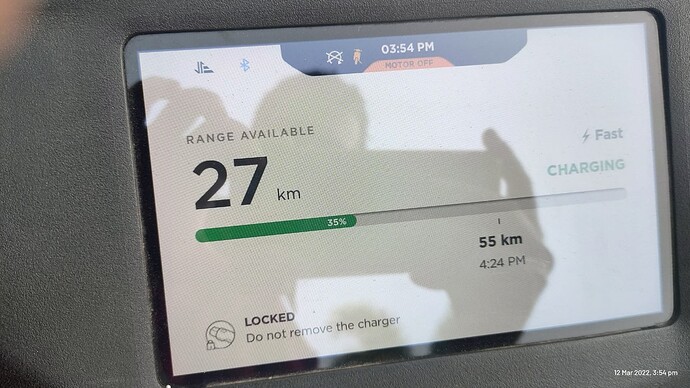 To kill time, I and another rider decided to have a juice since we both were exhausted with the ride in the sun. Both went in his scooter to ‘Tea Break’ near Panampilly Nagar. 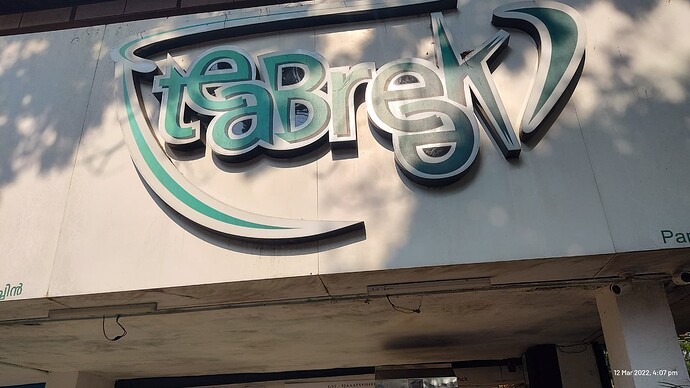 I just wanted the charge to be 50% with which I can comfortably reach home without any issue. But fast charging was faster than I expected.

When we reached back at the grid at 4.18pm, the charge was upto 70% with just 24 mins of charging, i.e 35% increase in 24 mins. With the grid’s convenience we can take the Ather for long rides without much range anxiety. Only issue is, no other grid points closer to home, nearest is 20km away. Plugged off charger when it reached 70%. 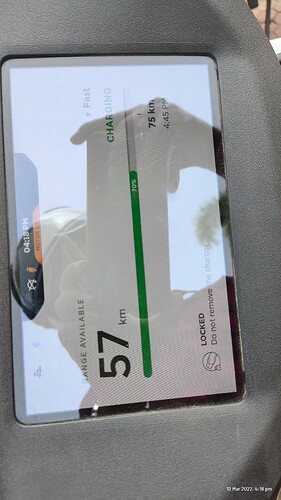 Then rode for 22km from the grid point before taking a short break. Still around 20km to home. 52% charge remaining shown in the dashboard, sorry that the image taken is a bit blurry. Already ridden 90km for the day with 23.6Wh/km average efficiency for the entire day. 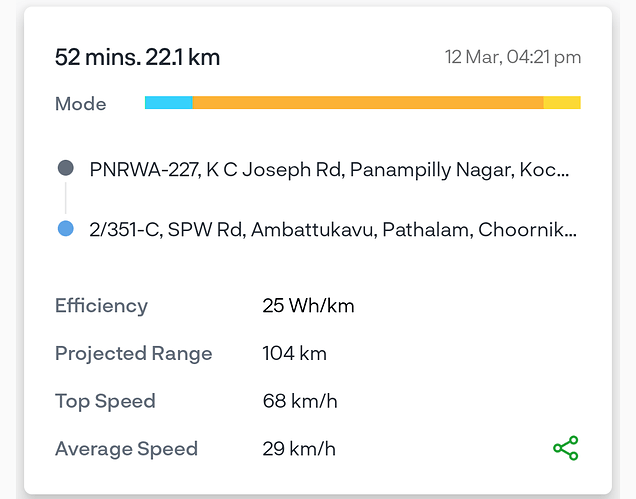 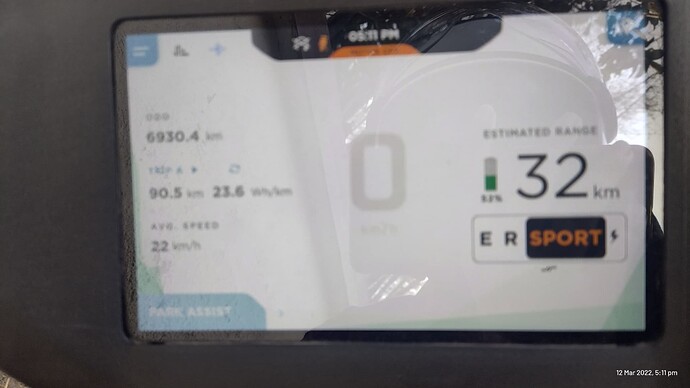 Reached the town next to home for a small work after 17km ride. 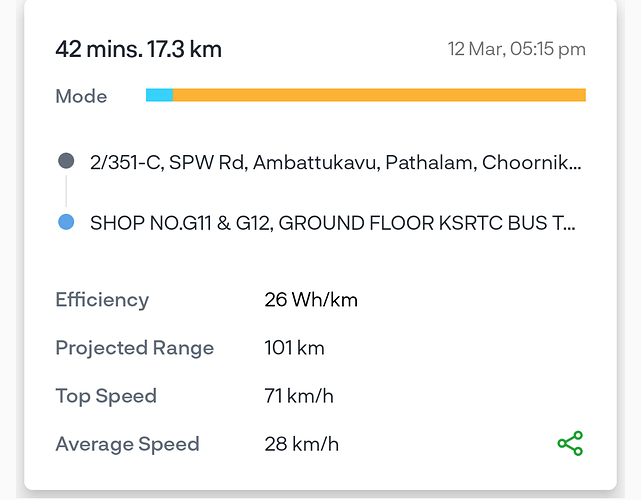 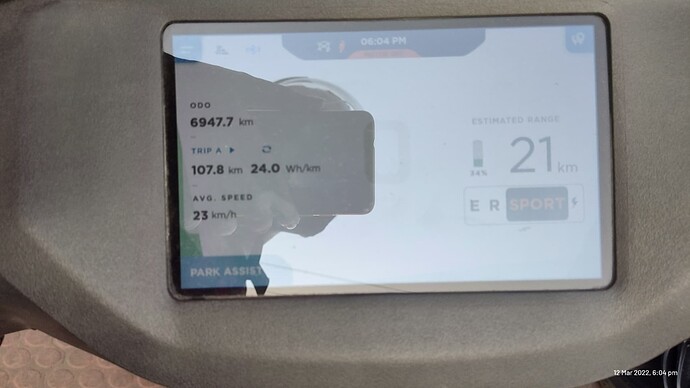 So 107km done, 34% charge remaining. This ride was more aggressive compared to other rides till now with traffic green lights getting the better of me in the highway. But overall it was an efficient ride except for the green light rides

Finally reached back home by 6.13PM with 31% charge remaining. 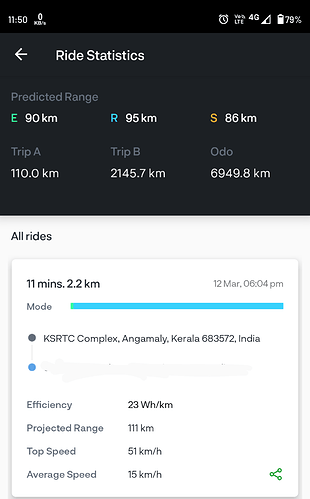 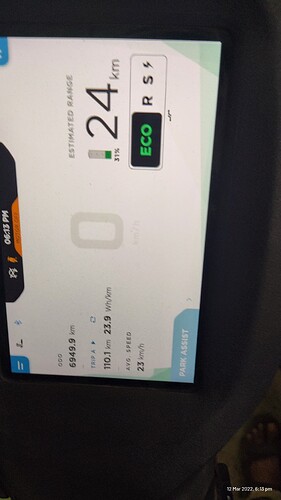 Overall it was an enjoyable day with really long ride and breaks in between. Ather grid helps to extend the range without significant time spent at the charger. Final Trip A : 110.1km , 23.9Wh/km efficiency.

Hope you liked this blog and it gave an assurance about riding Ather and reduce range anxiety. As read in other forum posts to ride efficiently, have to be in higher mode and maintaining a constant speed. I’m sure other riders would have completed the ride faster without much issue. Just need to extend grid points more to the outer regions of Kochi so owners who stay far away can also take part in long rides.

3 Likes
A Rainy day ride to Kochi
Tips on how to get good range from your Ather 450X
Atherstack Cylon - 10.3.0 - SmartEco
Ride to Thrissur EC