We’re rolling out the beta version for the Ather App v3.6.1. Let’s face it, ride statistics are great to show off those amazing rides with the highest range for some, and rides with a good average speed for many. Whichever flavour you like, sharing ride statistics involved extra steps, like hiding your location and cropping that screen shot.

Now, you can share your ride statistics straight from the Ather App, and it’ll generate an image you can share on social media. So go ahead, sign up for the beta program if you want to test this early, and share your feedback.

Oh, don’t forget to share some of your great rides on twitter! Use #MyAtherRide, and we’ll retweet your rides! 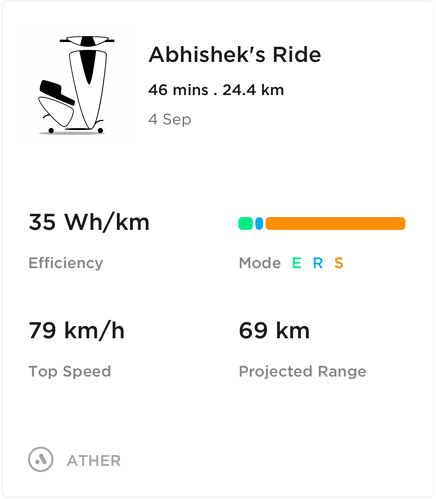 To get the beta version of an app you have to have the public version installed. To check if an app has a beta version available:

If you’re on iOS, you can sign up for our Testflight beta with the above link:

To leave a beta:

To leave a beta program:

Note: if you leave an early access or beta program, your space will open up and someone else may take it. You are not guaranteed to be able to get your space back later.

On iOS, open the Test Flight app, click on the app you signed up for, scroll down and select “Stop Testing”.