We’re rolling out a new app update (3.5.2) for early access for iOS and Android. Do install this version to test and share your feedback, by signing up for the beta program on the Google Play Store or the Apple App Store.

Note: This is an early release, where we are seeking reports of any bugs or issues. Please do not install this version if you’re expecting a very stable version of the app. The stable version will be released in a few days.

What’s changed in this version:

The forum is now a separate tab on the home screen of the app, for better accessibility. 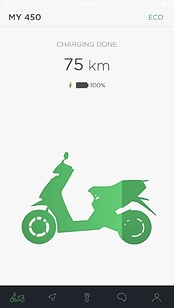 To get the beta version of an app you have to have the public version installed. To check if an app has a beta version available:

If you’re on iOS, you can sign up for our Testflight beta with the above link:

To leave a beta:

To leave a beta program:

Note: if you leave an early access or beta program, your space will open up and someone else may take it. You are not guaranteed to be able to get your space back later.

On iOS, open the Test Flight app, click on the app you signed up for, scroll down and select “Stop Testing”.

The notch overlaps with the header on the forum tab. Unable to access my profile page!

Getting this error when i try to send a location directly from google maps to ather app.

The error is not specific to any location, randomly checked few places on google maps and tried to share it. The error pops up once every four times when the location is shared to ather app.

Iam from Chennai, when i try to share a chennai location it shows directions from Bengaluru

Noticed and flagged this already! It seems to happen when opening the app after clearing it from background apps.

Every time I share a location from Google Maps to the Ather App, the directions originate from the middle of Bangalore city (Majestic area) to the destination. Eventhough the app correctly identifies my current location.

I guess it’s defaulting the start point to Majestic or whatever the GPS coordinate for “Bangalore” is.

Looks like the charging done notification bug is still not completely fixed.

After trying the beta on iOS now installed the beta for Android.

Having trouble to share direction to Ather App and sometimes, even when sharing location, it shows “location not found”. With regards to charging completed notification, it is still showing like before

Thanks to Ather team for rolling out this feature

Prior to this I was not a fan of typing in the very slow dashboard. This will surely help me plan and send the maps by not sitting idle on the Bike

The location sharing from Google to Ather app works perfectly except for this glitch which I encountered.

We’re rolling out a new app update (3.5.4) for iOS and Android. We had released a version (3.5.2) to beta users a few weeks back, and we’ve fixed the bugs and issues reported hence.

What’s changed in this version: 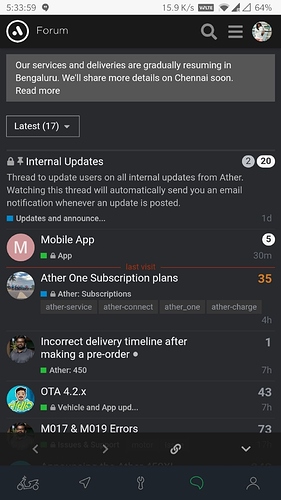 The forum is now a separate tab on the home screen of the app, to make it easier for owners to access the Ather Community from the app.

One of our most requested features. When you get a Google Maps link on WhatsApp, Messenger, SMS or other apps, you can share the location directly to the Ather App.which can then be pushed to the vehicle to start navigation.

While most of us have been working from home, we might be getting back to work soon. And if you’re heading back to work, you’ll now get a prompt at 8AM and 5PM to remind you to push the location to your scooter for navigation.

And a bunch of bug fixes and improvements.

The update has been rolled out from our side, there might be a delay of a few hours, before you’re able to see on the Google Play Store or Apple App Store.

We’ve rolled out an update and incorporated fixes to some of the bugs and issues reported here. Here are some of the issues and bugs fixed: